The Temple of Elemental Evil [ToEE] is a licensed Dungeons & Dragons RPG that was first released in 2003 by Atari. It is based on the Greyhawk campaign setting and uses the D&D 3.5 edition ruleset.

One look at The Temple of Elemental Evil and you’re going to think: “Baldur’s Gate“… Because it very much looks and plays like that particular game. That said: the game does have some heritage in the Fallout series, because Tim Cain (the lead designer on the original Fallout games) was also director of this.

END_OF_DOCUMENT_TOKEN_TO_BE_REPLACED

An RPG with a funny name, based on the AD&D Forgotten Realms campaign setting, Menzoberranzan is a 1994, first-person, party-based adventure game developed by DreamForge Intertainment for Strategic Simulations Inc.

END_OF_DOCUMENT_TOKEN_TO_BE_REPLACED 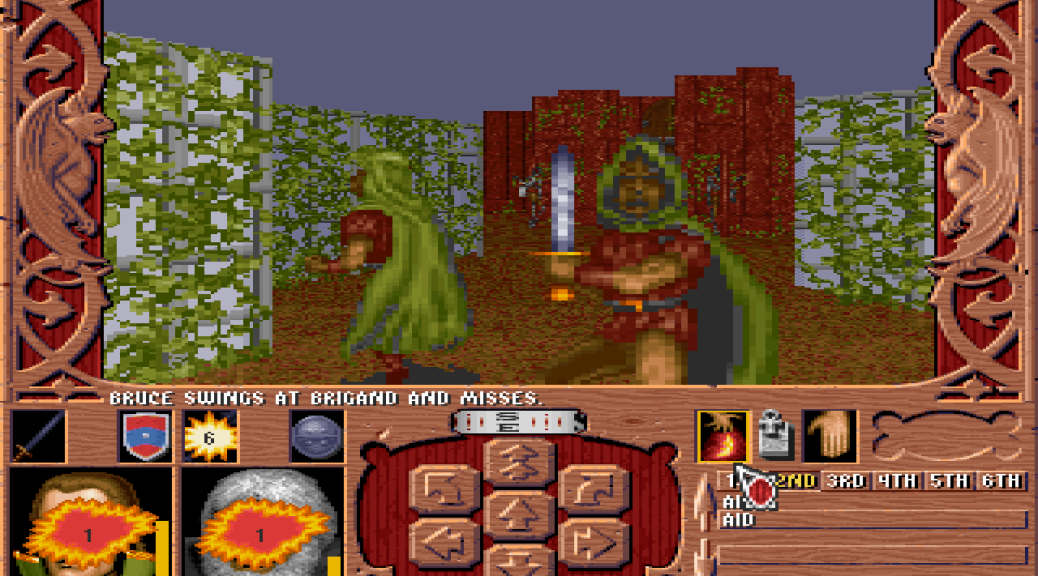 Released in 1994, Ravenloft: Strahd’s Possession was developed by DreamForge Intertainment for Strategic Simulations Inc. and was distributed by US Gold in the UK.

I remember it well because I reviewed it for PC Player magazine back in the day.

END_OF_DOCUMENT_TOKEN_TO_BE_REPLACED

The third episode in the classic Eye of the Beholder series was not developed by Westwood Studios – as the other two games were – but by publisher Strategic Simulations, Inc. itself, and as a result it doesn’t quite hit the same mark as parts one and two.

END_OF_DOCUMENT_TOKEN_TO_BE_REPLACED

Released the same year as the game that preceded it (1991), Eye of the Beholder II: The Legend of Darkmoon is another excellent first-person, party-based, TSR AD&D-licensed Role-Playing Game with atmospheric, level-grinding gameplay.

END_OF_DOCUMENT_TOKEN_TO_BE_REPLACED

Westwood Studios‘ Eye of the Beholder is a bold attempt to replicate the thrills of Dungeon Master, with real time, first-person exploration and combat.

END_OF_DOCUMENT_TOKEN_TO_BE_REPLACED

I remember playing and reviewing this PC MS-DOS game when it first came out in 1994.

Al-Qadim: The Genie’s Curse is a more ‘action-oriented’ TSR role-playing game, compared to many of the other ‘Gold Box’ TSR RPGs of the time (and there were lots – courtesy of SSI and US Gold). ‘RPG Lite’ you could call it.

For starters: character generation is kept to a minimum. You choose a name and: you’re off… No long-winded menus to negotiate, as is the norm in these games. Stats are predetermined and you can’t change them. The player cannot upgrade weapons or armour, but experience points are gained which unlock new powers as you progress.

Control of the main character (a Corsair) is via mouse or joystick, and the controls are kept simple. You can move, talk and shoot, in real time, and do other things depending on the context icon. Combat is real time as well, and the Corsair can wield two weapons simultaneously – and power them both up – which makes things different and interesting.

Getting a foothold in the game means passing an assault course at the beginning of the game, then holding onto an island swarming with monsters. It takes a while and some nimble swordplay to make way. Thankfully the game has easy saving, so you can pick up anywhere outside of a conversation.

Actually, the dialogue in Al-Qadim: The Genie’s Curse is pretty good too. Better than something out of a pantomime. Which makes this game all the more worth playing… still. If you fancy a classic TSR RPG with a setting that isn’t trolls and goblins.