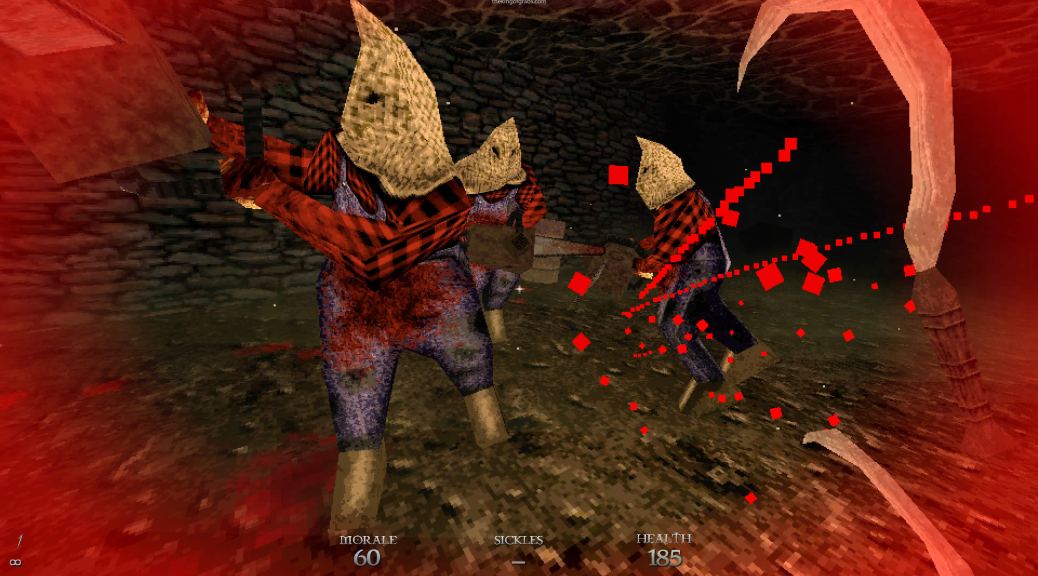 Dusk is a 2018 release from New Blood Interactive, developed by American programmer David Szymanski. It is a horror-themed first-person shoot ’em up with simplistic graphics, atmospheric music, lots of weapons, and plenty of blood and gore.

It doesn’t look like much when viewed as still screenshots, but the beauty of the game comes from its refined controls, interesting level design, and engaging, fast-paced gameplay.

Dusk takes place in and around the town of Dusk, Pennsylvania. Underneath the town is a labyrinth of tunnels and ruins, which have been occupied by government forces that are trying to harness its magical powers. They have, of course, fallen foul of the magic forces and have succumbed to demonic possession; becoming hostile to anyone who intrudes into the area.

You play as a nameless treasure hunter and must fight your way into, and through, the vast maze of buildings, tunnels and caverns, and defeat the evil forces found within.

The single-player game is split into three distinct episodes. The first episode – called “The Foothills” – begins on a farm outside of the town, and you must work your way through the outskirts (rural environments such as swamps, barnyards, cornfields and sawmills) until you reach the underground passageway that takes you into an industrial zone. The second episode – “The Facilities” – sees you fighting your way through a variety of science and military personnel who are guarding a multitude of sinister, occult machines, which you discover are extracting power from the slaughtered remains of the (dead) local populace. The third and final episode – “The Nameless City” – is set in a weird alternate reality populated by a cathedral, then a corrupted version of the player character’s memories – ultimately leading to a showdown with the evil being responsible for all the madness.

The object of the game is to simply reach the exit of each level and survive the onslaught of attacks from enemy forces, as well as avoiding death from the many hazards encountered.

Of course a big part of the game is the joy to be had with the many weapons available – all of which are awarded to you as you explore the levels and find them. You start off with twin scythes and quickly add a pistol to your arsenal in the very first room you start in. The pistol is hidden in a ‘secret’ cubby hole in the wall and this is an indicator of the nature of finding weapons in Dusk – many of them are hidden in secret areas that you have to find before brandishing them. In fact: finding secret areas is one of the main elements of Dusk gameplay. Some secret areas are hidden behind weak walls (indicated by cracks in the texture-mapping), while others require backtracking after pressing a switch, or are hidden in areas that you have to crouch into to access, or stack objects on top of each other to reach high-up platforms. Finding secrets in Dusk is not always easy, but those with an eagle eye and an inquisitive mind should have no problems.

Later on there are collectable power-ups that allow you to climb up vertical walls, for example, that open up previously inaccessible areas. There’s a very cool ‘slow-down-time’ power-up (in which time only runs normally when you move, otherwise you’re in slo-mo), and there are also ejector pads that launch you into the air in a satisfying arc, and these allow you to bounce around the place like a man possessed (aided by the fact that there’s no fall damage). These simple mechanics add a lot to the game and make it feel like a cross between something like Quake III, Brutal Doom, and the classic horror shooter, Blood, but ramped-up to even more insane and interesting levels.

What makes Dusk so good is that you can play the game carefully – going for achievements and maximum kills – or you can speedrun the game to finish as quickly as possible (or both, if you’re good), and the way the game is structured (getting harder and harder, and better and better) makes it increasingly fun to play. Ammo is strictly limited in every weapon, so you have to vary what you use to play, which is a good thing as the game forces you to use every weapon in combat. The boss battles are challenging enough to encourage you to save your more powerful weapons for those encounters. Level design is creative and surprising (E3M3 is my favourite). Also: special mention must go to the in-game music, which is atmospheric and really elevates the game. I particularly liked the John Carpenter-like introductory music, before a levels starts, which reminds me of the iconic Prince of Darkness film score. And there’s plenty of humour in the game, though it’s not overt. The dog in the rolling cage is pretty funny… Bad dog!

Dusk feels like a sincere love letter to the classic first-person shooters of the early 90s, like Quake, Half-Life, and that ilk, although it is certainly much more than “just a Quake clone”. Yes: the trails of blood are simplistic and the textures are blocky, but everything moves at such a pace that you don’t really notice. Dusk was built using the Unity Engine, and was deliberately made to feature reduced numbers of polygons and limited colour palettes in order to keep the speed up, and to keep the look of the game feeling distinct and deliberately retro.

As well as the single-player campaign there is also a survival mode, called “Endless“, and also a 16-player multiplayer mode (called “DuskWorld“). Overall, Dusk is a brilliantly fun shooter that is highly recommended to anyone who isn’t a bleeding-edge modern shooter snob. It’s clearly a game that has been made with love and care, and with a vision to entertain gamers who like a challenge.

Jumping diagonally is the fastest way to move. Diagonal jumps will also take you further. If you can’t reach somewhere when jumping, trying moving diagonally.

Ducking and sliding underneath bullets can save you precious health.

The jump mechanic is quite flexible. You can jump around walls, and come back on yourself (in a U shape) with a little practise.

Finding some secret areas can be challenging. Always keep an eye out for cracks in the walls, which you’ll need to blow up, or for odd-looking wall textures, which are often hidden doors. Also: crouching into hidden places reveals some secret areas.

Throw the basketball through the hoop on E1M2 (Down On the Farm)! The basketball is located next to the portal inside the secret area below the cornfield.

Every level has a bar of soap hidden somewhere. If you merely pick up the soap on each level you’ll get an achievement for it. Check out this guide for the soap locations on each level.

Throwing the bar of soap at enemies will insta-kill them. That goes for bosses too. Very useful if you’re having problems with certain enemies… The soap is indestructible too, so can be used repeatedly.

There are three secret levels, each of which have hidden access doors. E1M2 (Down On The Farm) leads to E1MS. E2M4 (The Infernal Machine) leads to E2MS, and E3M4 (Crypt of the Flesh) leads to E3MS. Check out this guide for detailed access information.

Throwing a Crystal of Madness at an enemy, or group of enemies, will make them fight among each other. Very useful if you’re low on ammo or need a breather.

In Endless mode, to easily get the 20 wave achievement, play on The Cathedral level. Use the wide open spaces to jump around enemies and get them fighting each other, and keep replenishing your ammo by collecting the backpack inside the church. Watch out for the tornado though!

One achievement requires that you use cheats. See this guide for a full list of Dusk cheats. Note that there is no console in Dusk – you simply type the cheat codes into the keyboard, live, while you’re playing.

One thought on “Dusk, PC”