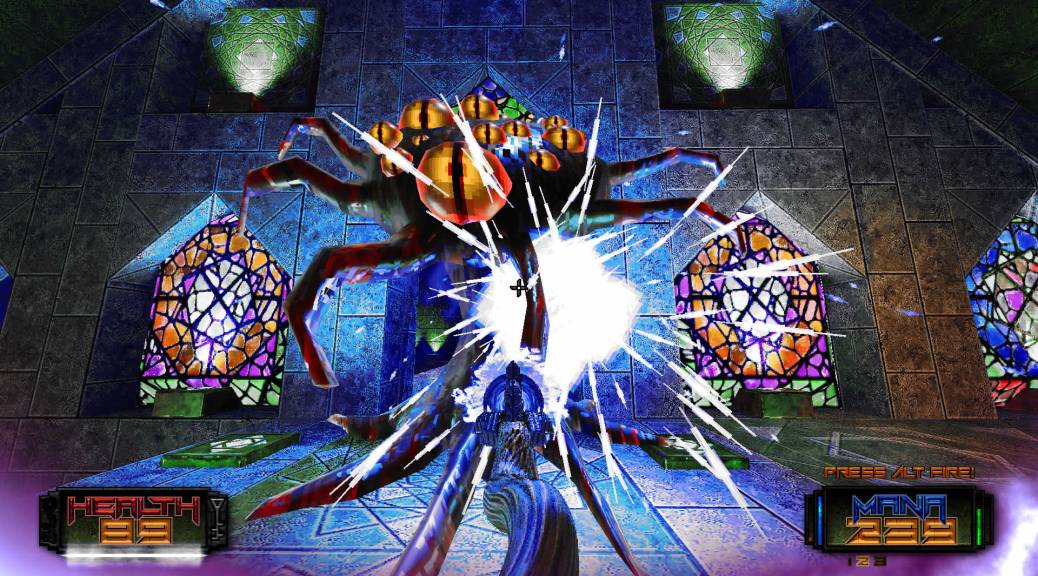 Amid Evil is a first-person, single-player fantasy shooter/action game developed by Indefatigable and published by New Blood Interactive in 2019. The game started life as an unfinished Doom mod in 1997 and later grew into Amid Evil when co-creators and childhood friends Leon Zawada and Simon Rance formed their own company, with Amid Evil being their first project.

Amid Evil is built around Unreal Engine 4 technology and combines magic and melee weaponry in a similar style to games such as Hexen and Heretic, which this game has been described as a “spiritual successor” to. You begin the game with a double-sided axe and quickly find a number of other weapons to supplement it. In general, most of the weapons have a ranged element (ie. they fire magic ‘bullets’, balls, beams, or waves out), even though they more often than not are swords or staffs of some kind. Each weapon also has an alternative fire mode and these usually have to be charged by collecting the souls of fallen enemies.

Amid Evil‘s campaign has episodes that increase in difficulty as you progress, and a single-player survival mode where the aim is to stay alive for as long as possible against endless waves of monsters.

In campaign mode the basic idea is to work your way through various complex environments and eventually beat the boss at the end of each. This will then unlock the door to the next episode, which you access via a central hub area. When you complete one episode you revert back to the default weapon (the aforementioned double-sided axe) and must collect the other weapons again. The story is minimal and exposition is found in the form of wall inscriptions. In general, though, Amid Evil is a pure action game and the level of challenge depends on the difficulty level chosen at the beginning of the game. My first playthrough was on medium difficulty and I found it to be about right for me.

The game of course has a ton of hidden secrets to find, and monsters are introduced every new episode. Some weapons require a particular colour of mana to power and this can be collected by walking into the appropriate pick-ups as you explore.

There’s no fall damage in Amid Evil, which is good, but that doesn’t mean that you can’t die if you fall into the wrong place. Some areas will insta-kill you if you drop into them, which you’ll probably discover yourself as you play.

Enemy AI is decent, and monsters will often swarm you in groups. They can also jump and climb over obstacles to get to you, which is neat.

Amid Evil has a deliberate ‘modernised retro’ look and feel to it, with bitmapped textures made to look apparent, much in the same way as the graphical style of 2018’s Dusk, which was also published by New Blood Interactive. Another connection to Dusk is the guy who did the music for Amid Evil – Andrew Hulshult – who also provided the excellent soundtrack for Dusk.

Graphically, I really like Amid Evil. I love the unusual colour-styling and lighting. The level designs are stunning too, with complex structures changing configuration as you throw switches to allow access to previously unreachable areas. Amid Evil does support ray tracing if your graphics card can handle it (mine can’t, but that doesn’t bother me), but it still looks pretty amazing without.

Overall I really enjoyed playing Amid Evil. It’s more of a shooter than a hack-and-slash game, which suits me fine as it’s rare that sword-based combat games work that well (The Witcher 3 being a major exception to that rule). I liked the level design; the weapons; the lighting; the graphical style, the simplicity of the game, and the challenge. If I had one complaint – and it’s only a minor one – it would be that I would’ve like more weapons, but the ones that are in there are well thought-out, beautifully designed, and nicely-balanced, so I can’t really complain.

If you like fantasy action games I recommend that you give Amid Evil a try, when it’s at a price point that suits you. Or try the free demo that’s available if you’re unsure.