Released in 1983 by Sierra On-Line, Ultima on the Atari 8-bit is more archaic and frustrating than the original Apple II version. And it looks pretty awful too, with a real lack of colour – especially in towns where the game is in monochrome unless you play on a machine (and monitor) that supports “artifacting“. In artifacting mode the dungeon and town graphics look similar to Apple II graphics, but they don’t really take advantage of the Atari‘s superior graphics capabilities.

The overworld sections look and play okay, and the dungeon sections are slow but not too bad, but there is something fundamentally wrong with the game’s timings. Especially the time passing feature, which I think is too fast and causes you to trip up all the time.

This version also has some differences to the original that make it far less interesting to play. Like, for example, time passing when you’re choosing what to buy in a shop, which I’m sure didn’t happen in the original, and it is highly annoying here. The game also doesn’t say when you’ve found a secret door in a dungeon; the text formatting is really bad, which makes it difficult to read what’s going on during combat; there are far fewer (if any) monsters roaming the overworld; the quests don’t work the same as in the original, and the levelling is different too. There are also some terrible spelling mistakes in it (“theif” and “thief” in the same sentence, for example), and even some bugs (in one session I fell into a hole and down to the level below and was seemingly trapped inside a four-walled barrier, but could just walk through them…). Whoever programmed this: they didn’t really care, had poor attention to detail and were probably also rushed by Sierra. I’m certain it wasn’t Richard Garriott himself who coded this as he would’ve done a much better job.

Overall, this is a poor conversion of the original and is not the version to play if you want to experience the first Ultima. In fact: even if you’re an Atari fan I’d say give this a wide berth. Play either the Commodore 64 version, or the Apple II re-release. An Atari 8-bit conversion of Ultima deserved better than this.

More: Ultima I: The First Age of Darkness on Wikipedia
GOG: Ultima 1+2+3 on GOG.com 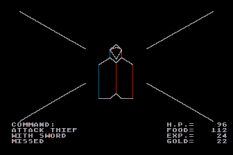 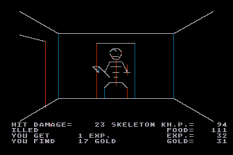 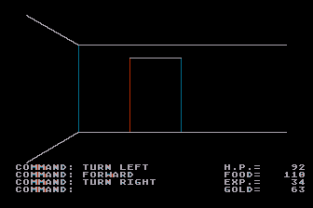 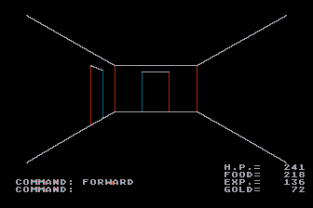 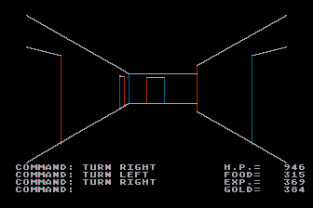 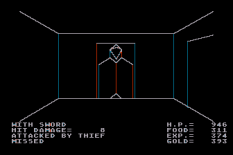 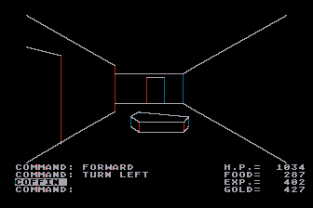 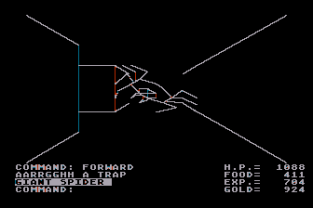 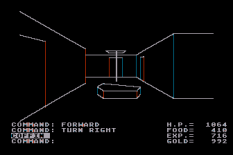 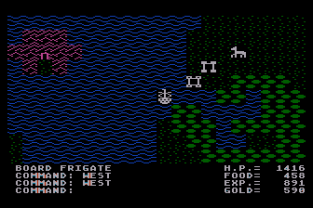 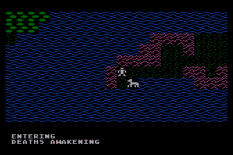 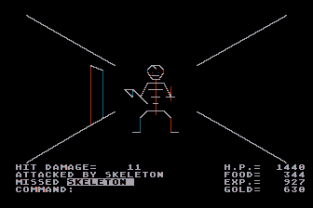 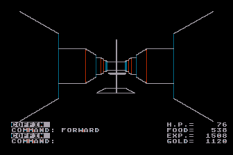 Ultima keyboard commands:
a = Attack = Attack a monster
b = Board = Mount a horse or board a ship or vehicle
c = Cast = Cast a readied spell
d = Drop = Drop gold, weapons, or armour in a castle or city
e = Enter = Enter a town, castle, dungeon, or landmark
f = Fire = Fire a vehicle’s weapon
g = Get = Pick up Mondain’s gem or an item from a king (with permission)
h = Hyper Jump = Travel to next system in the direction you’re facing in space
i = Inform & Search = Tells you where you are on playfield; looks for secret doors in dungeons; performs a sector scan in space
k = Climb = Climb up or down ladders in dungeons
l = Lag Time = Sets the amount of time the game waits after a monster’s attack (default is 3)
o = Open = Open a coffin in a dungeon
q = Quit = Save game (doesn’t actually quit)
r = Ready = Equip weapon, armour, or spell
s = Steal = Steal from shops or castles
t = Transact = Buy from merchants or speak to a King
u = Unlock = Open a cell in a castle (requires a key) or a chest in a dungeon
v = View = Switch between top view and front view in spacecraft
x = Exit = Dismount from horse; disembark from vehicle
z = Stats = Look at your statistics and inventory
Spacebar = Pass time

One thought on “Ultima, Atari 8-Bit”