The Commodore 64 version of Ultima III: Exodus was first published by Origin Systems in 1983 and came on three floppy disks. There is a fan-made ‘Gold’ version of the game available, that has compressed these down to a single floppy disk file, which saves a lot of disk-swapping, and that’s the version that’s probably worth finding, if you want to play this game on the C64.

If you want to read a more thorough explanation of the game itself, check out my review of the Apple II version.

Just like in the second Ultima: if you’re playing the C64 version in VICE you’ll have to set up a positional keyboard and use those annoying diamond-shaped “[‘;/” keys to move around. It’s not ideal, but if you’ve already played Ultima II then you should be used to it. There don’t seem to be any joystick controls, and you can’t use the actual cursor keys, so you have to use keyboard only.

A few features of the C64 that I noticed: food consumption seems better (lower) than in the Apple II and PC versions, which is good as it seems a bit too high in those versions. I managed to get a sailing ship very early in this version, although that could’ve been luck. Combat seems maybe a little tougher than in the Apple II original. It’s definitely faster, so if you don’t make your moves quickly you can end up forfeiting them (which can be a real problem unless you’re fully focused, although if you’re playing in a emulator the pause function can at least help give you more thinking time). Graphically, the C64 version is simple but effective with good use of colour in the overworld but monochromatic dungeons. There’s constant music in the C64 version, but thankfully it can be turned off. It’s not bad, though.

Overall, the C64 version of Ultima III is probably my favourite of the 8-bit home computer ports. It’s arguably even better than the PC version, although the relatively fast combat does mean that you have to concentrate fully during battles.

1. It’s worth having more than one frigate as the moving whirlpools can destroy them (make sure you park them in places where a whirlpool is less likely to move to, and if you see a message saying “ship destroyed” then one of your ships has been hit).

2. Don’t bother with melee weapons – use ranged weapons for all who can use them. A sling is better than a sword because you can shoot at enemies before they can reach you. Upgrade to a bow as soon as you can afford it.

3. Try to get into the town of Death Gulch as soon as possible – to the back room of the “Armours” shop (the one with all the chests). You don’t need to bribe the first guard and unlock the first door to get into Death Gulch; there’s a hidden route into the town just south of the front entrance. You’ll need at least one key and will have to bribe one guard on the way to the back room, though. Find a map if you’re unsure of the route. Once in the back room, open all the chests for a much needed cash boost (note: use emulator quicksaves to avoid traps and maximise loot).

4. You can strategically fight battles to form a wall of chests. A line (or a square ‘room’) of chests will prevent monsters from reaching you (which is useful in some situations; ie. allowing you to walk around inside them to regenerate Magic Points before entering battle, or keeping tough monsters at arm’s length). Even a single chest can keep monsters away, giving you valuable time to recoup your MP or health. While this may sound silly – believe me: by the time you run into some dragons you’ll be glad you did it. At the start of the game don’t get too carried away building large chest walls – start small and build up. You do need to open chests and collect gold to survive.

5. Don’t go too low in dungeons to begin with as the monsters in lower levels are much tougher than those on the higher levels. There are maps available online, showing all the dungeons in detail. Use them. Buy torches from the Thieves Guild and use them to light up the darkness. Don’t use light spells – save your magic points for healing and combat magic. Avoid ‘strange winds’ that blow out your torches. Also avoid gremlins wherever possible because they steal your food.

6. If you see dragons in the game: run! Honestly: dragons are terrifying, super aggressive, and hard to beat in combat. Hide behind the landscape – or unopened chests – and stay out of range of their fireballs. Carefully use emulator quicksaves to learn how to deal with them, but try not to save yourself into an unwinnable situation. When entering combat with a dragon, consider re-loading and trying again if there are more than two or three of them. In combat, try not to stand in range of their fireballs (move in line, fire, then move out of line again), and try to avoid entering combat with them if they’ve reduced any of your party member’s health to less than 200 HP. Ideally you want each character to have 500 HP or more before you fight them. If that’s not possible: protect your weaker characters by not moving them into harm’s way.

7. When you get to Ambrosia you can pay to raise your character’s attributes at four different shrines. It costs 100 GP to raise an attribute one point. The Shrine of Dexterity raises dexterity, obviously, and is hidden inside the forest in the south east. You’ll need to take over a sailing ship to reach it. The Card of Sol is in the shrine (stand on the shrine then use ‘O’ (Other Command), then type ‘SEARCH’ to find it). The Shrine of Wisdom is reached through a locked door in the far north east section of the map. This shrine raises the wisdom attribute and should only be used for healers. The Card of Death is located to the right of the shrine. The Shrine of Strength is hidden within the forest in the mid west. Use it to raise the strength attribute for all fighters. The Card of Love is in the shrine. The Shrine of Intelligence is in the far western corner of the map and requires two doors to be unlocked, and a sailing ship to reach. You should raise intelligence for all your magic-casting wizard-type characters there. The Card of Moon in in the shrine. Note: before you go spending all your money raising your stats willy nilly – stop and think. Your priority should be raising the dexterity of all your characters so that they land hits in combat more often. Secondly, you should concentrate on raising your intelligence on your wizards and your wisdom on your clerics, so you can access higher-level spells, and the strength attribute of your fighters. When you run out of money you’re going to have to return to Sosaria and acquire some more, before returning. Acquire the pirate ship via the forest tunnel in the south west corner of the map and re-enter the whirlpool to return to Sosaria (you need this specific ship, the others will not work). Note: there are some nasty monsters hiding behind locked doors. Use a map to find your way around and don’t unlock any doors that aren’t necessary. There are no monsters in the main valley that you arrive in, so don’t worry about being attacked. Go to Ambrosia prepared, with some keys (you need four), as much money as you can scrape together, and plenty of food (200 should suffice for your first expedition). You don’t need any torches. Note that all four characters can SEARCH for and acquire the cards, but I don’t think that’s required to complete the game. It doesn’t hurt to have each carrying a card, though.

8. You’re going to need a lot of money during the second part of the game, to raise your individual character attributes in Ambrosia. Be careful, though: the maximum gold one character can carry is 9999 GP. Anything higher will reset back to zero! If the gold your four characters are carrying is more than 9999 GP combined DO NOT use the “join” command to collect it together (otherwise it’ll reset back to zero). Note that treasure chests in dungeons re-spawn between visits, meaning that you can keep going back to your ‘favourites’ to loot them. I suggest going to Ambrosia on your first trip with around 2000 GP for each character. Keep re-visiting the dungeons “Perinian Depths” and “Clues” and looting the chests on the upper levels to acquire gold. Use quicksaves to maximise your loot and avoid damage from traps.

10. To complete the game you’ll need all four Marks; all four Cards, and 2550 HP for each of your characters. You’ll also need exotic weapons and armour. To get past the silver snake blocking the entrance to Exodus‘s castle you need to yell a secret word that is revealed by an NPC in the town of Yew. 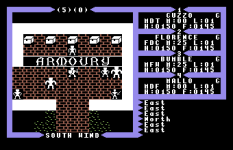 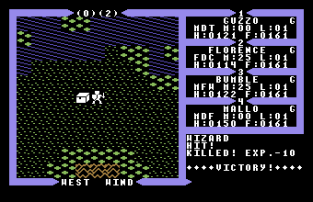 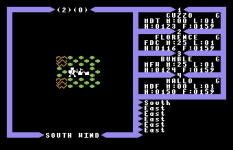 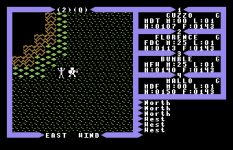 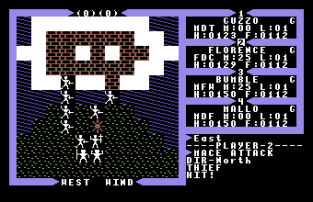 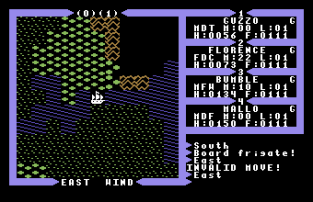 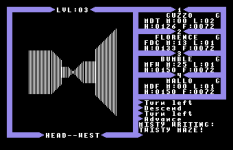 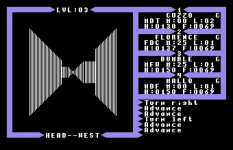 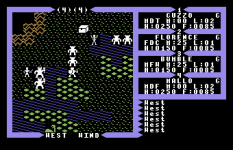 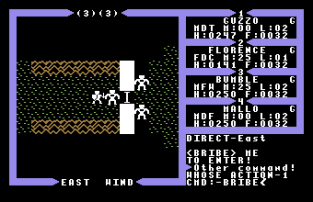 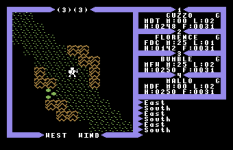 a = Attack with “readied weapons” (followed by direction of attack)
b = Board (mount a horse or board a frigate)
c = Cast a magic spell (followed by player number, spell type, and spell letter)
d = Climb down a ladder in a dungeon
e = Enter a town, castle, dungeon or other landmark
f = Fire ship’s cannons in the direction indicated
g = Get/open chest (followed by the number of the player who will search for traps, open the chest, and acquire its contents)
h = Hand equipment (trades equipment between two players; followed by prompts to determine what is to be exchanged)
i = Ignite a torch
j = Join gold (gives all gold in party to player indicated)
k = Climb up a ladder in a dungeon
l = Look (identifies an object in a specified direction)
m = Modify order (exchanges positions of any two players within the party)
n = Negate time (stops time for all outside the party; requires a special item)
o = Other command (enter any command desired during gameplay; includes BRIBE, SEARCH and others)
p = Peer at a gem (shows a bird’s eye view of a town, castle, dungeon or the overworld; one viewing per gem)
q = Save game to disk (from the overworld only)
r = Ready weapon for use in combat
s = Steal (from behind store counters; success depends on skill)
t = Transact; use to talk to townspeople or trade with merchants
u = Unlock and open doors (if you have the key; followed by direction of door and the player whose key is to be used; one use per key)
v = Volume (toggles sound effects on or off)
w = Wear armour (outfits player with specified armour)
x = Exit (leave behind or dismount your current transport and travel on foot)
y = Yell any word that’s typed
z = Stats (displays your vital statistics, possessions and spells)
Spacebar = Pass one game turn without taking any action