Thankfully this game was given an English fan translation in 2020 by Adventurous Translations, which makes it playable to non Japanese speakers. According to the readme file on the translation patch the game was not much fun to translate (mostly for technical reasons), and isn’t seen as being a very good game by the person who translated it. That said: I got the translation patch to work fine and am overjoyed that I can now play it in English, so a big thank you to Adventurous Translations for their efforts (they are much appreciated).

Ganbare Goemon: Space Pirate Akogingu follows the same path as the famous Super Nintendo Goemon games, with exploration sections in towns, and side-scrolling action levels connecting locations. The idea is to battle, jump and swing your way through the action sections to reach the next town and continue the story.

Graphically, Ganbare Goemon: Space Pirate Akogingu is extremely colourful and varied, with fabulous 2D graphics throughout, although it doesn’t quite seem to have the same level of chromatic beauty as the SNES games. It’s hard to put my finger on it. The PlayStation obviously has better graphical capabilities than the Super Nintendo, but the use of colour in this game doesn’t seem to be as good as in the SNES games. Don’t get me wrong: I love the graphics in this game, but they just don’t seem to have quite the charm of the SNES Goemon games. Maybe it’s a technical thing, or different artists at work, or maybe it’s just nostalgia? I dunno. Maybe I’m just blind or stupid? 🙂

Gameplay-wise, Akogingu is pretty damn good. Goemon has his usual pipe to attack with, and can also can throw coins (as usual), and Ebisumaru has a boxing glove on an extendable arm which can punch enemies and can also be used for swinging on hooks, and he can also throw shuriken. You can switch between Goemon and Ebisumaru at any point, by pressing Select.

At the end of the first action level – after the first boss fight – a new playable character joins you. A green boxer bandit called Goroku. He asks you to follow him to his hideout, which is a partially-sawn tree that you see early in the first level. Which means going all the way back, through the level you just completed, to get to it. This isn’t a bad thing – going through a level you just did, in reverse. And now you have a new playable character who can be chosen by cycling through with Select.

Once you’ve fulfilled Goroku‘s request you then have to play through a log-rolling level on a river. This is an indication of the game’s variety – in fact: the variety of gameplay elements in the entire Goemon series. You never know what the game’s going to throw at you next. Which is one of the things I love about Goemon‘s crazy adventures.

One thing I immediately noticed was that the scrolling action sections no longer have countdown timers, which is a blessed relief because the last Goemon game I played (The Twinkling Journey) caused me no end of problems with the level timers. This is most likely because the action levels in this game feature problem-solving puzzles that take time to crack. Ebisumaru‘s swinging action is also easier to control than Goemon‘s swing chain in the previous game, which means slightly less frustration than was experienced in The Twinkling Journey (which drove me nuts).

Overall, in spite of the minor criticisms I think that Ganbare Goemon: Space Pirate Akogingu is an excellent addition to the Goemon series and a fun game on the PlayStation. I do love these 2D games on the PlayStation – they’re not only a welcome break from all the 3D games, but they really show what the PlayStation is capable of in terms of 2D graphics. 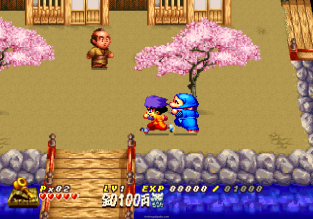 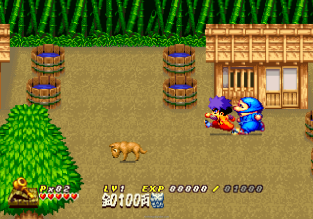 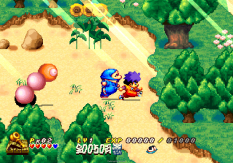 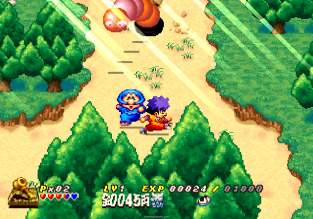 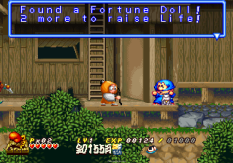 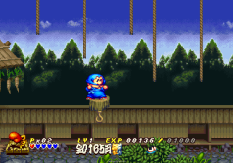 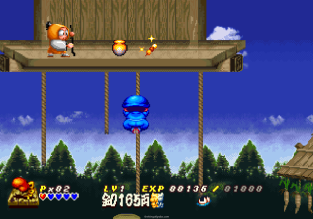 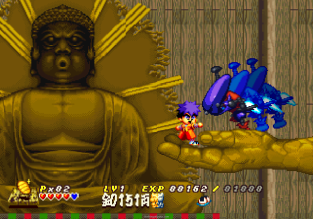 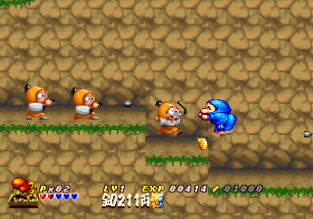 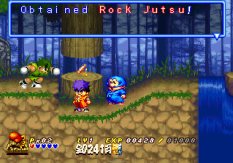 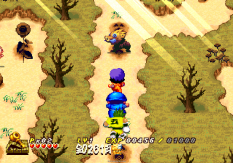 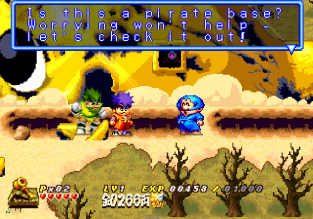 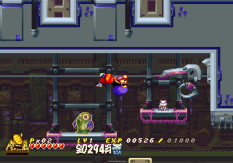 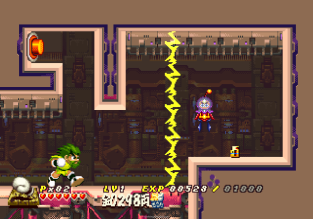 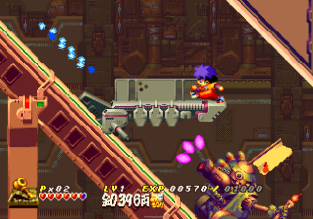 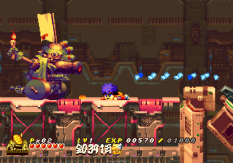 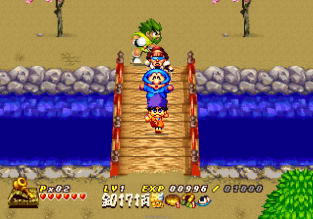