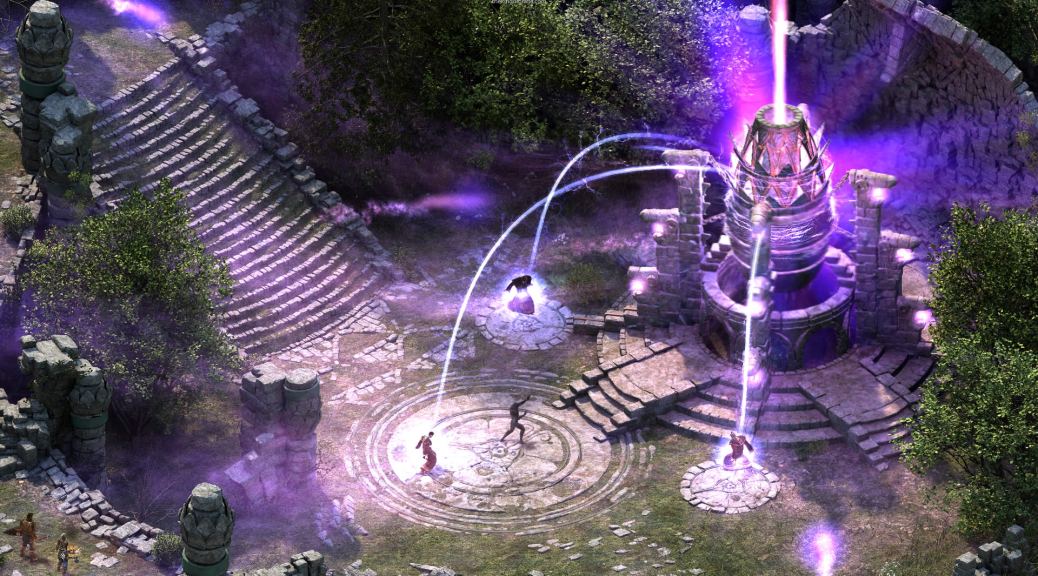 Developed by Obsidian Entertainment and first released in 2015, Pillars of Eternity is an isometric RPG very much in the style of Baldur’s Gate, with a multi character party system, quests and turn-based combat.

The crux of the story is that you (the main player character) are thrust into the world and told that there is a problem with children being born as “hollowborn” (without a soul), and that you must investigate. In doing so you become aware that you are a special kind of person, called a “Watcher”, that is: someone who can see past lives of dead people and also interact with their souls. And, using your power as a Watcher, you must then set off to solve the problem of the hollowborn.

You control up to six party members, the first one you can name, but the rest you are given as established characters who you can develop further, and each of which also have their own personal side-quests, strengths and weaknesses, and dialogue. Quests and dialogue are mostly written as text, but there is some voice acting, although this is normally only for key sentences.

Exploration is done by clicking the ground where you want your party to walk to, and moving around to dispel the black cover of the ‘fog of war’. There’s a useful sneak mode that allows you to creep around silently and avoid detection. Combat will initiate manually, or automatically when you’re within range and have been detected by hostiles, and on the default setting time will stop to allow you to issue commands to your characters and micro-manage their positions and attacks. Depending on the class of each character you can use a wide variety of different weapons and armour, magical spells, and special items.

There are eleven different character classes available (fighter, rogue, ranger, barbarian, monk, paladin, wizard, druid, priest, chanter, and cipher) and each have unique abilities, in and out of battle. A detailed inventory system allows you to equip and otherwise manage all of your items and a very useful bottomless stash takes care of your overflow. A quest log keeps track of where you are in the story and what you’ve got to do next.

One interesting feature of the game is that characters gain experience points and level-up when they complete quests or solve certain puzzles – not for winning battles – which allows non-violent solutions to problems to be rewarded. How you treat other people also affects your reputation, and this plays a key part in the game. Certain factions can be allied to (or made hostile), and they will help you (or attack you) as your reputation evolves. Also: certain locations and quests are only unlocked once you reach a set point in the game, or your reputation is at a certain level for a specific faction.

Pillars of Eternity is split into different acts and once you’ve reached a certain point in the game there’s no turning back, so it’s wise to take your time and grind levels by completing quests, rather than ploughing through it without thinking. Some locations contain very tough enemies that will obliterate you at low levels, so you’ll probably end up re-loading quite a bit.

Another interesting feature is the fact that, during the first act, you discover a run-down stronghold not too far from where you began the game and the idea is to take it over and renovate it to serve as your base. Improving your stronghold costs money of course, so you must gradually work on it, buying upgrades which then take time to implement. From time to time your base might be attacked by outside forces and the game will tell you this, giving you time to prepare defences beforehand. There’s even a dispute over ownership of the stronghold, which results in a fairly large battle at a key point in the game, although you do have control over when the battle begins and can build up your forces before it starts – by hiring extra muscle, or by completing side quests that award you with extra help during the fight.

The resting system in Pillars of Eternity is an interesting deviation from the norm, in that: where you rest confers different bonuses to your characters. Sleep in a luxurious inn, for example, and you might get a Dexterity or Stealth bonus. Build various annexes onto your Stronghold and you’ll get a wide variety of rest bonuses at your disposal. Camp outdoors and you’ll only get the bare minimum.

Other features include: crafting, enchanting (adding extra powers to weapons and armour), bounty missions, a very useful toggle that shows (in blue and purple) what on-screen objects can be interacted with, a useful compare items feature, cute animal and magical companions, soulbinding of weapons and armour (which locks them to certain characters, but unlocks their full magical potential), a click-and-drag select system, and side quests that allow your non-party members to travel and earn experience points while you’re off doing other things.

Pillars of Eternity is so full of excellent, refined features that it plays very much like an apex predator in the evolution of the Role-Playing Game. Yes, it takes much from the Baldur’s Gate games, but in reality it’s better than any of them. It has beautiful graphics, evocative music, is atmospheric, engrossing, and well worth a purchase and play. The Definitive Edition, which collects together all the DLCs with the main game, has more than enough content to keep you going for weeks if not months. A sequel, Pillars of Eternity II: Deadfire, was released in 2018 – also developed by Obsidian.

One thought on “Pillars of Eternity, PC”