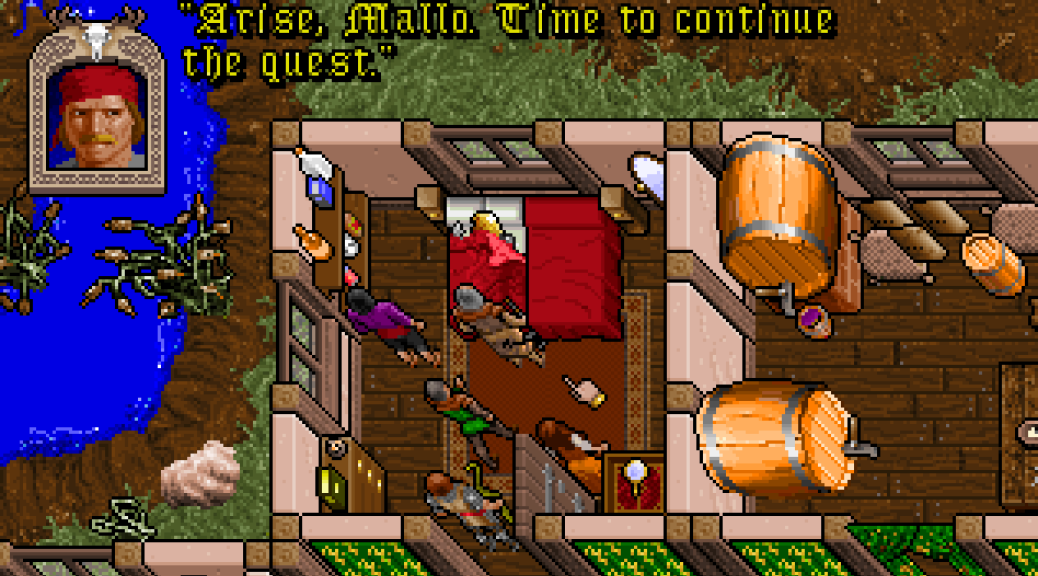 Ultima VII: The Black Gate is the seventh game in the Ultima series and the first part of the “Age of Armageddon” trilogy, and was first released for PC MS-DOS by Origin Systems in 1992. The game is highly-rated among RPG fans and even series creator, Richard Garriott, describes Ultima VII as “the most masterfully-executed” of the Ultima series.

Ultima VII comes in two parts, with Ultima VII Part Two: Serpent Isle coming out the following year, in 1993. Both parts use the same game engine, which again makes use of an overhead, scrolling, isometric viewpoint, only this time the game world is shown full-screen and the surrounding information panel seen in Ultima VI has gone (yay!).

There is no character creation process (or character import options) in this game, you simply enter a name; choose either a male or female Avatar; a portrait image, and you’re off.

You begin in the town of Trinsic, with Iolo as a companion, at the scene of a grisly murder. Examining the gory scene it seems to be a ritualistic killing and you must investigate who did it. The plot insinuates that a religious group called ‘The Fellowship‘ may be involved (or at least: some of its members might be), and the introductory sequence shows ‘The Guardian‘, who is the new main antagonist. One interesting thing about the story, that becomes apparent early on, is that the gargoyles from Ultima VI have integrated into society and now live in peace with humans.

Movement of The Avatar, and item manipulation, is done via the mouse and keyboard. Clicking or holding down the right mouse button makes him walk, and left-clicking describes people or items that you can interact with. Double left-clicking will initiate a conversation, or allow you to pick an item up, or you can drag it onto either yourself or Iolo to automatically put it into their backpack. Pressing ‘I’ (or double left-clicking on a character) will bring up their respective inventories. Sacks can again be used as sub-containers, which helps keep your inventories well-managed. By double-clicking on a backpack, or a sack, it will open as a pop-up window and these can be re-positioned and brought into focus as required. Clicking their individual tick boxes will close them and pressing Escape will close all windows at once. This is an improvement over previous games and it makes managing items and inventories fairly easy and intuitive. That said: it is not without its problems as items tend to overlay each other, which can make finding things difficult.

Pressing ‘Z’ brings up each character’s statistics and these are divided into primary and secondary attributes. Primary attributes are Strength, Dexterity and Intelligence, and secondary attributes are Combat, Magic, Hits, Mana and Level. Training Points (TP) are gained alongside Experience Points and these are used to increase Strength, Dexterity, Intelligence, Combat or Magic attribute by visiting trainers. You pay a trainer’s fee, then spend some TP, to increase the attribute you’re focusing on.

Conversations are overlaid on-screen and topics that you can talk about are added to the list as they are revealed, in much the same way as in previous Ultima games. Clicking a keyword with the mouse cursor then initiates a conversation on that particular topic. Gone are the days of typing in commands to Ultima games and many players will be glad of that.

Over the course of the game you’ll meet various NPCs who can join you. You can add up to seven companions to your party (making a total of eight, including yourself), and many of these will be familiar to those who’ve played the previous Ultima games. Some companions are more useful than others, though, so it’s worth consulting a guide as you add new members. As your party grows, your companions will follow The Avatar in formation and will break off to attack enemies if you activate Combat Mode.

Combat has been changed to real-time in this game, and Combat Mode is toggled by pressing the ‘C’ key. Aside from the switch from turn-based to real-time, the system is similar to what was seen in Ultima VI, but with some tweaks. You manually control The Avatar’s combat moves by default, and companions are controlled by the computer AI, depending on the ‘Attack Mode’ they are set to. This can be either: Attack Weakest, Attack Strongest, Defend, Attack Nearest, Berserk, Flee, Random, Protect, and Flank. Unfortunately you can’t set companions to ‘Manual’ and control their attack moves – only The Avatar can be manually controlled. That said: it is sometimes better to set The Avatar’s Attack Mode to an auto setting to allow the computer to attack for him. You can still move him manually, but when he stops moving (and is set to an auto mode option) the computer will choose when he attacks. Which can often be better than you trying to click on a moving enemy on-screen. One important new addition to Ultima VII combat is “Protect Mode”, which allows you to designate one companion to protect during battle. To turn this on you must click on the halo above a character’s Attack Mode icon; if it turns gold that means that that character is then protected by all the other characters during combat. Only one character can be protected at a time, though.

In terms of magic: you still require a Spellbook in one hand to cast spells, and that Spellbook requires recipes to be in it to have access to certain spells. You can buy new recipes from NPCs who you meet throughout the game. There are eight levels (or ‘Circles’) of magic and you need to be at a certain level to be able to use the higher-levelled spells. Reagents are still required to cast spells, but you only need to have the ingredients in your inventory – you don’t need to pre-mix them before use.

New features that have been introduced into Ultima VII include: wagons, which are pulled by horses, and which allow you to travel faster and more safely around the wilderness (but can get stuck on items and dead bodies on the ground, which you sometimes have to clear out of the road); weather effects, like clouds that cast shadows on the ground, and changing lighting conditions; digitised speech (that was used for the first time in the series and was ground-breaking for the time, although it is only used for certain events (note: the speech – and all of the sound in the game – was coordinated by Martin Galway, the famous British Commodore 64 musician/coder, who at this point in his career had moved to America to work for Origin); spitoons (that you can spit into!), and a toggle for “mouse-handedness” (that switches the function of the left and right mouse buttons). This was also the first Ultima game that allowed multiple save files, which of course is very useful and is commonplace today.

It’s worth noting a few niggles that might annoy some players… Firstly: you can’t sell weapons and armour in the game, but you can exchange gold (nuggets and bars), Silver Serpent Venom, or jewels, for gold coins. You can also make money by trading or by doing odd-jobs (like collecting eggs for a farmer or by making bandages), but not being able to sell loot from fallen enemies is frustrating because you end up discarding much of what you find. Secondly: the food/feeding system is a right royal pain in the arse – especially when your party is at maximum size. Party members will complain when they are hungry, and it gets old quickly. The only way to know who needs feeding is to bring up each character’s stats panel and look for a crossed knife and fork at the bottom. Feeding characters must be done manually and it’s like having multiple babies to feed while you’re exploring… Some types of food satiates a character’s hunger more than others, and it’s always a good idea to have a sack full of food on hand to stop your companions from moaning (or dying of hunger). Having to feed characters has been a blight on the Ultima series since the very beginning to be honest, but you just have to deal with it. The game did crash on me a number of times too (but not as frequently as Serpent Isle did).

It’s also worth noting that stealing stuff is still not a good idea, and if you do it too much your companions may leave, but you are at least allowed to lead an un-virtuous life if you want to. As far as I can tell, though, there’s no ‘karma’ attribute in this game.

Overall, Ultima VII: The Black Gate is a really good game that deserves its place in the halls of RPG greatness, although it’s not perfect and it won’t appeal to everyone. It sometimes runs a little slowly when there’s a lot going on on-screen, and the mouse movement can be a little cumbersome – especially when you’re trying to fit through small gaps. But it’s a step in the right direction and foreshadows what was come in Ultima VIII.

The sheer size of Ultima VII: The Black Gate can be daunting to some, so if you’re going to play it then I’d recommend using a walkthrough and a map to help you.

An expansion pack – called Forge of Virtue – was released the same year as this, and adds a new location to explore (The Isle of Fire), alongside an associated quest, and opportunities for The Avatar and his party to gain more powerful weapons and extra experience.

Ultima VII: The Complete Edition is currently (at the time of writing) available on GOG.com and includes: Ultima VII: The Black Gate, Forge of Virtue, Ultima VII Part Two: Serpent Isle, and The Silver Seed. 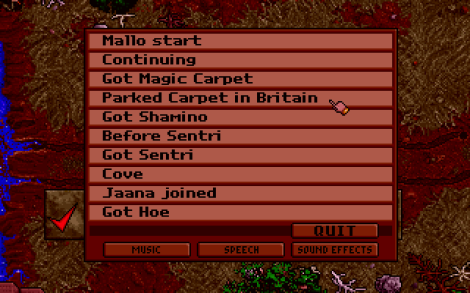