The Atari 8-bit conversion of Ultima II: The Revenge of the Enchantress was developed and published by Sierra On-line in 1983, coming out not long after the original Apple II version.

Ultima II on the Atari 8-bit uses a technique called “artifacting” to render the colours, and apparently if you don’t have the right chipset in your Atari then it can render the colours incorrectly, as seems to be the case here… I tried everything I could to get the colours to display properly, but it doesn’t seem to have worked. I don’t think red trees and blue roads are what Sierra had in mind when they programmed it, but that’s what I got… Still: the game still looks okay like this and plays well enough. If I manage to somehow get the colours working correctly in Altirra (if they are indeed wrong) then I’ll replace these screenshots, but they at least give a representation of the Atari version.

The keyboard layout for movement is strange though (“[” for up, “?” for down, and keypad keys “*” and “+” for left and right), but I managed to get used to it quick enough to get a game going. I’ll admit that I didn’t play the game for very long, though. Just enough to get a taste of what it’s like and how it plays.

Ultima II might look like bobbins by today’s standards, but it’s actually a pretty good game when you get into it. It’s not an easy game to play, though. IMHO the best Ultima II version to play is either the Apple II 1989 remake, or the PC MS-DOS version with the graphics update.

More: Ultima II: The Revenge of the Enchantress on Wikipedia
GOG: Ultima 1+2+3 on GOG.com 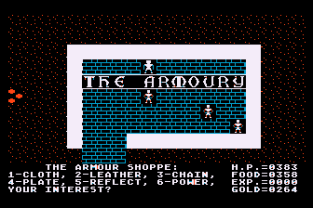 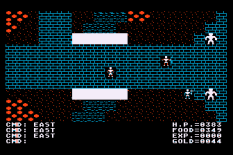 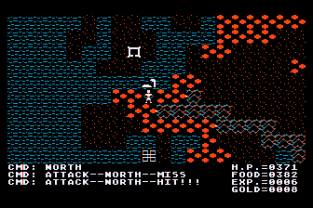 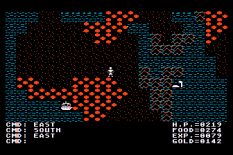 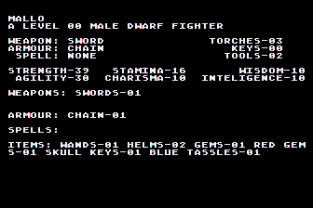 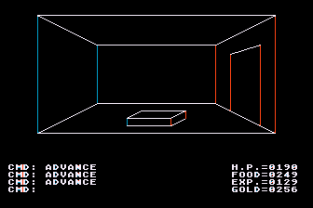 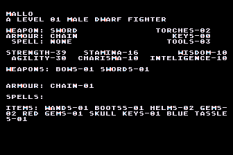 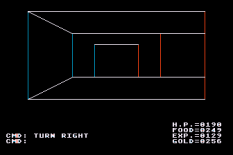 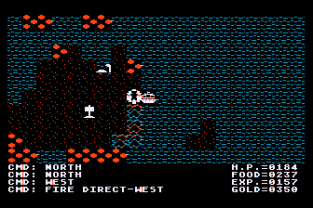 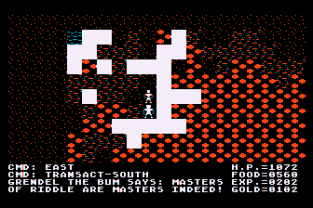 a = Attack with the weapon you’re holding
b = Board a plane, ship or other form of transportation, or mount a horse
c = Cast a spell. You must first prepare the spell, using Magic. Spells can only be cast in dungeons and towers
d = Descend a level in a dungeon or tower
e = Enter a town, castle, dungeon or other landmark, or read a sign
f = Fire your ship’s guns
g = Get an item
h = Hyperspace your spaceship to the coordinates you specify
i = Ignite a torch
j = Jump up and down
k = Climb up a level in a dungeon or tower
l = Launch or Land in a plane or rocket, but only on grass
m = Readies a magic spell you know for casting
n = Negate the passage of time for all things farther than one square from you – if you posses a specific magic item
o = Offer gold as payment or bribe
q = Quit and save your progress to disk. Available only while on Earth and on foot, in the countryside
r = Ready a specified weapon
s = Steal from a store without paying for it
t = Transact business, or just start a conversation. Must be followed by a direction command
u = Unlock doors if you possess the keys. You must indicate the direction of the door
v = View to toggle between normal view and bird’s-eye view of town or planet. You must possess a specific magic item
w = Wear a suit of armour that you own
x = Exit or dismount your current transportation
y = Yell anything you can type. Often used in combination with Jump
z = Stats to display your vital statistics, possessions and spells. Also pauses the game
Spacebar = Pass time and eat

One thought on “Ultima II: The Revenge of the Enchantress, Atari 8-bit”