In it you take control of a futuristic, robotic aircraft carrier and must work your way through an island archipelago, taking control of each island and competing against a rival carrier.

You have ground-based, amphibious craft (Walrus), and aircraft (Manta) at your disposal, and must send them out to do your bidding – using Manta for combat, and Walrus for deploying payloads (usually command centre modules, which allow for the take-over of an island).

Carrier Command is controlled via a series of screens and icons, and a mouse, and was quite revolutionary at the time of original release.

Aside from the odd niggle (like vehicles – and the Carrier – not having the intelligence to go around things, you have to plot courses carefully, to avoid grounding), Carrier Command holds up well against the ravages of time, and still plays brilliantly now. You can play in either “Strategy” mode or “Action” mode, which further broadens the appeal. 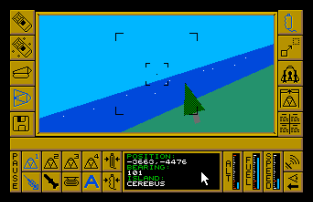