Written by famous Spanish software house Indescomp, Fred is a scrolling platform/maze game where you control a cartoon Indiana Jones-type character plundering treasures from an Egyptian tomb, while avoiding contact with ghosts and mummies.

Fred carries a pistol loaded with a limited number of bullets, although this is useless against rats (which scurry on the ground and must be leapt over), and chameleons (which climb the walls of vertical tunnels and must be dodged by switching sides on a rope). Ghosts, when shot, will simply turn in the opposite direction and continue moving. Thankfully mummies and bats can be destroyed with a single shot (although Fred must jump when shooting at bats, otherwise he’ll miss them). Fred cannot shoot when he’s climbing a rope, so you have to be extra careful in that situation – especially as ghosts have a nasty habit of moving through walls and into you when on a rope. Mummies have a nasty habit of jumping down vertical shafts too, which can be a pain if you’re climbing a rope and one falls on you. There are nasty poisonous green drips to avoid too, which means timing when you walk under them so that they don’t hit you. At times the number of meanies to avoid can get overwhelming and slightly unfair.

Graphically, Fred is appealing, and the main character is well drawn and animated. The scrolling maze moves slowly and very jerkily, and the “chunka-chunka” sound effect of Fred climbing ropes is strangely comforting (in much the same way as Bruce Lee‘s run sound effect is in Datasoft‘s Commodore 64 classic).

One thing I do like about Fred is the way that high scores are shown on a series of headstones after you die. I don’t think I’ve seen that in any other game.

While the basic gameplay of Fred is sound enough, it can get frustrating hitting dead end after dead end. There is a map that you can collect, which gives you a mini overview of the maze on the right-hand information panel, but I never could work out how to use it properly because it doesn’t show where you are on it. I did eventually tire of the game after wandering around the maze for a few hours. That said: I did buy this game for my Spectrum as a teenager and remember quite liking it, although even back then I felt that Fred was a wee bit too frustrating, without being particularly rewarding. It’s not a bad game, though, and the Spectrum version is a damn sight better than the awful Amstrad port (called Roland on the Ropes).

More: Fred on World of Spectrum 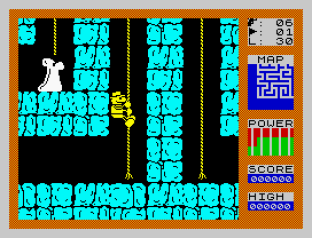 One thought on “Fred, ZX Spectrum”