Steve Turner‘s 1985 sequel to Avalon is about as atmospheric and exciting as a fantasy adventure can get on a ZX Spectrum. It really is amazing that this game fits in to only 48K of memory.

In their review of Dragontorc, Crash magazine criticised the lack of sound in the game, but I think they were wrong. The sound in Dragontorc is great. What that Crash reviewer didn’t notice was that you can tell when monsters are around by the sound of their footsteps, even when you can’t see the baddies on screen. It’s both atmospheric and a useful gameplay feature. And all the other sound effects are great too, and don’t slow the game down too much when they are playing (unlike many games on the Spectrum at the time).

As I said: Dragontorc is a technical miracle. Probably Steve Turner‘s finest hour, and still worth a play even now. In an emulator, or a Vega, or wherever. 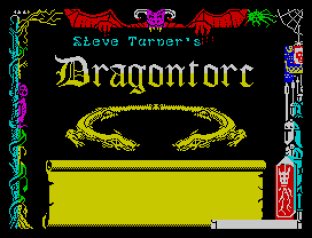 At the very beginning of the game.

You can take and give items to friendly non-player characters.

The only way to get rid of rampaging skeletons is with a magic missile.

Leg it from those spiders!

Found a key in a tree stump.

Found a golden seal marked ‘m’ in a locked chest. 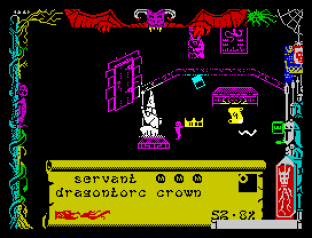 Maroc uses a spirit cursor to pick up and move items around.

I meet some kind of flying demon inside the Citadel of Morag. Time to run away.

More skellingtons. I need time to turn, aim and fire a magic missile.

One thought on “Dragontorc, ZX Spectrum”