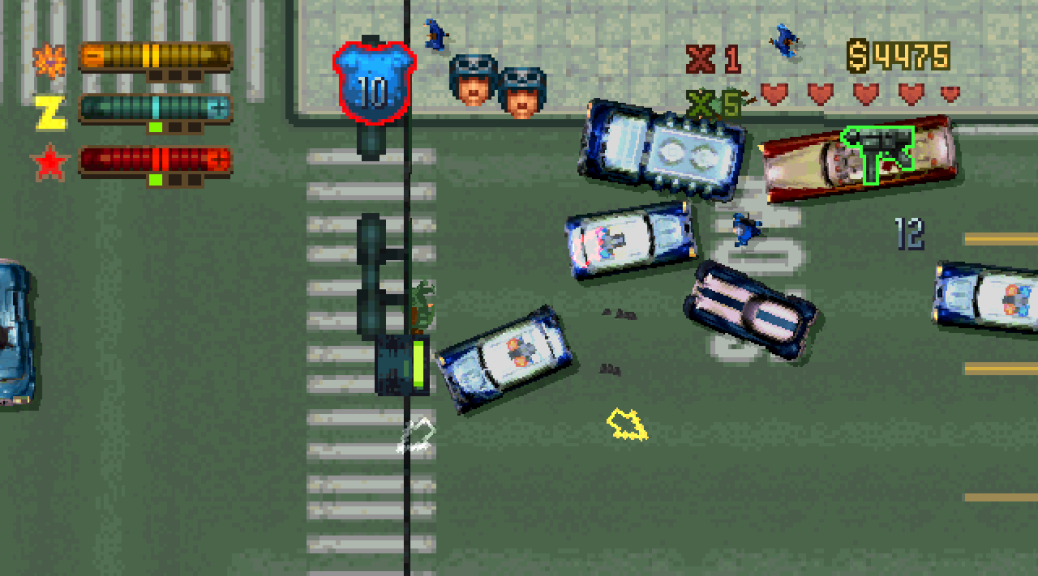 The sequel to the notorious crime simulator, Grand Theft Auto, was developed by DMA Design and published by Rockstar Games in 1999. Grand Theft Auto 2 is more of the same overhead, scrolling car-stealing action, although this time it is a set in a futuristic metropolis known as “Anywhere City“, where three feuding gangs are competing to become the dominant crime syndicate in the city.

You can take on jobs from any of the three gangs (the Zaibatsu in grey, the Loonies in green, and the Yakuza in blue) and arrows of a certain colour will point to locations around the city where you’ll reach waypoints for a specific mission. An optional tutorial mission at the start of the game explains how to play the game.

The first thing you’ll probably notice about GTA2 is that the graphics and presentation are a definite improvement over the first game. Cars and the tiny pedestrians are all beautifully drawn and animated and the 3D buildings also look less raggedy than in the first game. The overhead viewpoint, with a camera that zooms in and out depending on the speed you’re travelling, is mostly the same as GTA1.

Gameplay-wise: driving vehicles seems to be a little easier than in GTA1, with vehicles self-adjusting slightly to stay in lane. That said: other road users seem to be more abundant, and more aggressive than previously, and road layouts can be quite complex, so staying out of trouble can be challenging. Overall, though, the controls and gameplay are definitely more refined than the first game.

The missions in Grand Theft Auto 2 are similar to those in GTA1. Steal a vehicle; escort a criminal; assassinate an opponent; destroy something; sell stolen cars, and generally earn points and money in order to progress to the next stage. By completing jobs for a certain gang you gradually earn their respect, allowing you to take on tougher jobs from them. The downside, though, is that if you favour a certain gang their opponents will gradually become hostile to you, so eventually you have to pick a side to commit to.

The much lauded radio soundtrack from the first game has been expanded in this sequel. Each area features five radio stations from a pool of eleven and music will play from vehicles that have a radio. You can now change stations by pressing up. Each gang also has their own radio station that broadcasts within a certain area. Police vehicles, ambulances, fire trucks and tanks don’t have music, but they do play emergency broadcasts when you’re driving them.

Police interceptors are more numerous and persistent in this game, and if you start blowing up cop cars they’ll eventually send in a SWAT van, and if you blow up the SWAT van the cops will then send in tanks! It is possible to hijack a tank, but it’s difficult without using cheats. Once inside a tank you can rotate the turret and fire rockets, but authorities will send in more tanks to try to take you out. It definitely adds to the fun, though, if you feel like going on a rampage. Just like in the first game: the more people you kill and the more damage you do, the more your notoriety will increase and the more cops will chase you.

An eight-minute short film of live action footage was also shot specifically for Grand Theft Auto 2, filmed in New York City. This Full Motion Video (FMV) features actor Scott Maslen, who famously played DC Philip Hunter in the British TV soap opera The Bill, and snippets of it appear during the intro and at certain points during the game. Maslen plays a criminal called Claude Speed (terrible name!) who conducts jobs for several crime syndicates, but who is eventually killed by an assassin from one of the gangs he robbed. While the film segments don’t add anything to the gameplay they do boost GTA2‘s production values compared to the first game.

Other nice touches in Grand Theft Auto 2 include: vehicles and pedestrians being more interactive with the environment (including gang members fighting with police), other criminals (like muggers) who occasionally show up to cause you problems, garages that can modify vehicles and give them special improvements, side missions (like driving a taxi or a truck), secret areas, and hidden packages to find across a level.

Overall, Grand Theft Auto 2 is certainly a step-up from the first game and is more fun to play, although it isn’t a radical improvement. The next game in the series, Grand Theft Auto III, was the revolutionary instalment, and that came in 2001. 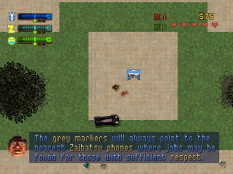 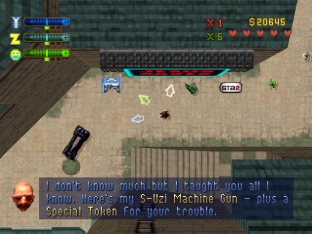 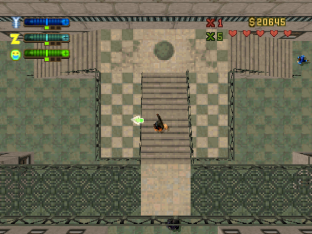 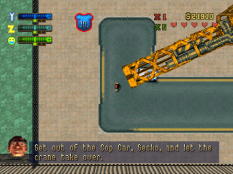 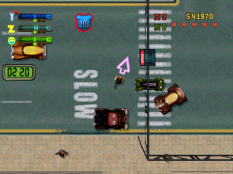 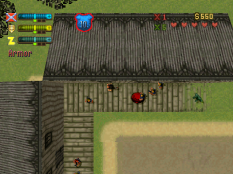 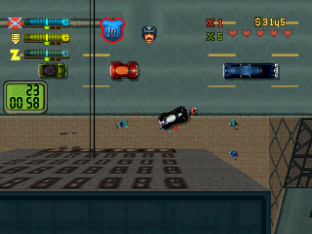 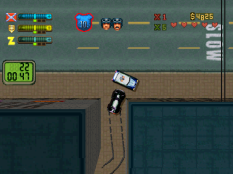 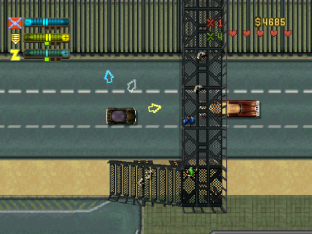 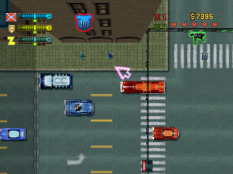 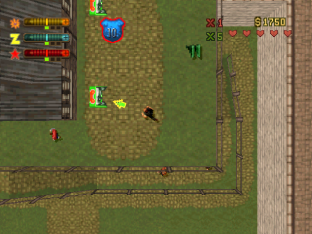 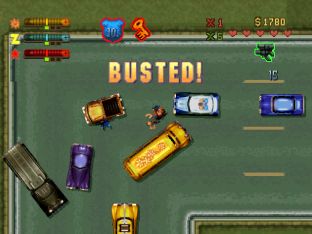