Known as Gradius in Japan – but Nemesis everywhere else – Konami‘s classic 1985 shoot ’em up is one of the earliest progressive blasters, with distinct levels and boss battles.

The game is somewhat reminiscent of the classic side-scrolling Scramble (also by Konami), but in Nemesis you fly a ship called the “Vic Viper”, and which has a variety of different weapons which can be powered-up by collecting capsules left by destroyed enemies.

In fact: Nemesis (or Gradius, or whatever you want to call it), was the first game to use this kind of power-up system and it was heavily copied by other developers afterwards. So: somewhat influential.

Nemesis has stood the test of time quite well. It still looks and plays very well, although it does seem to reach a point where the game simply has to guarantee you lose a life. Usually when you’ve built up your arsenal… One second there are few bullets. The next: there are bullets everywhere. And surviving certain sequences is more luck than judgement.

Nemesis is still worth a look if you’re interested in the history of shoot ’em ups, because it’s one of the most important early side-scrollers. 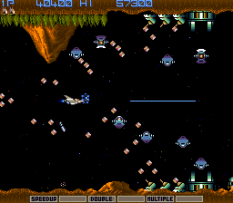 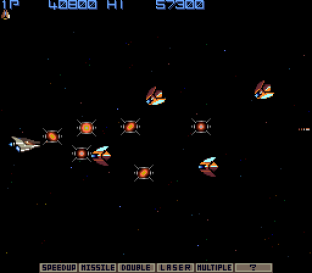