Ultimate Play The Game‘s iconic seventh release for the ZX Spectrum was first released in 1984.

Sabre Wulf is a colourful maze/action game, and was the first game to feature the lead character Sabreman.

Gameplay is frenetic and simple – the idea is you have to fight your way (with a sword) through a jungle maze in order to find four pieces of an amulet, which will open the exit (found in the middle of the map), and escape. The titular Sabre Wulf – a blue-coloured wolf found prowling a set area of the jungle – has to be avoided at all costs as it cannot be defeated.

Fondly remembered – like most Ultimate games – Sabre Wulf also prompted a wave of clones from other software developers, as was the case with pretty much every Ultimate game at the time.

Still a great little game to play now though, with lovely, colourful graphics and jolly sound. A classic! 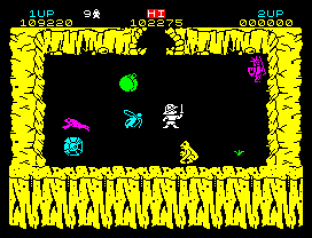 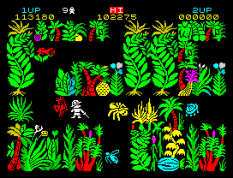 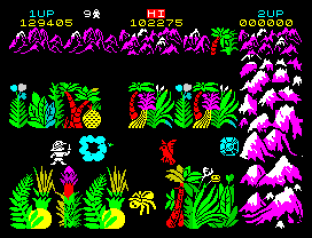