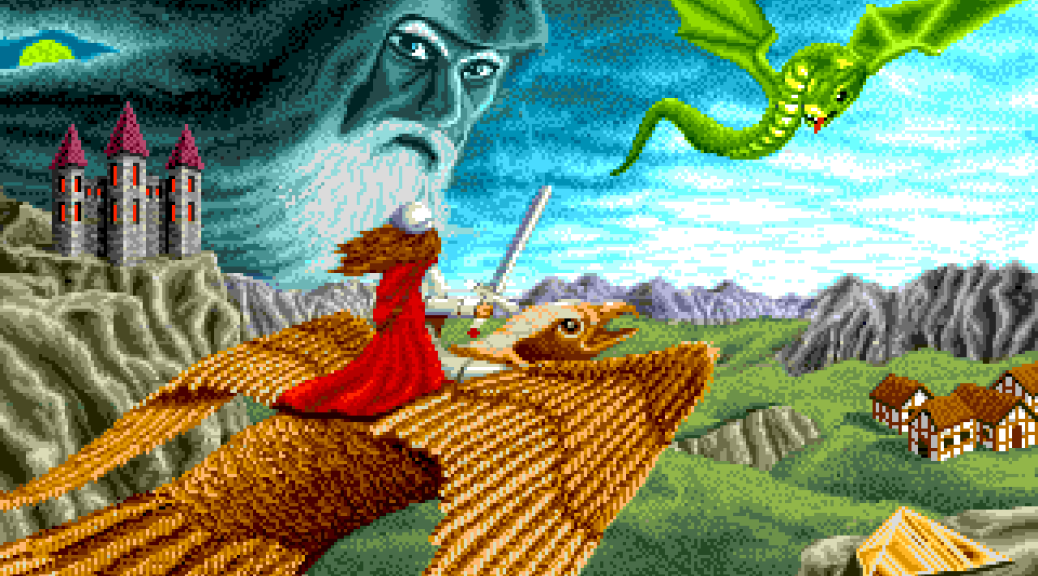 Amberstar is a German-developed RPG that was originally released for the Atari ST, Amiga and PC MS-DOS in 1992. It is an incredibly difficult game to get a foothold in, but is worth the effort because it is such an interesting gaming challenge to take on.

Amberstar is extremely detailed, different (possibly arcane), tense, and atmospheric. Some say that it is a cross between Dungeon Master and the Ultima series of games, and I’d probably agree with that. It is a curious mix of real time and turn-based gameplay, mixing first-person and overhead viewpoints.

The screenshots here are from the PC DOS version of Amberstar, as that version has the most colourful graphics (and the least bugs).

If you’re going to play Amberstar, which I highly recommend you do if you’re an RPG enthusiast, then I would advise playing along with an online guide or walkthrough. It really is that tough. Great game though!

Amberstar: your party are shown at the top. Their viewpoint is shown on the left. And combat positions are on the right.

As you explore you fill out the map on the map screen.

With a low swim skill, walking on water will hurt you. Avoid stepping on the whirlpools too.

Some of the monsters in Amberstar are truly scary!

Poisoned by a spider! Yikes!

Inside the Temple of Sansri. For a minute there I thought this statue was alive… Gulp.

Exploring Illien, the village of the Elves. A useful location with a good shop, found early on.

Trasric uses a spell that causes 8 damage to each member of an entire row of monsters.

The Guild of the Black Wizards. Not an easy place to get to.

You can move your characters around during combat by clicking on the grid on the right.

Amberstar’s Manyeye is clearly an affectionate “tribute” to a Beholder in TSR’s Dungeons & Dragons.

Just picked up the completed Amberstar.

Amberstar’s inventory screen. About to use Healing 5.

Learning a scroll has an element of luck. So save your game before attempting to learn important spells. And if they fail: reload and try again.

Nearing the final battle in Amberstar.

This pack of wizards look like they mean business! Ouch!