The Kristal is an obscure British adventure game based on an un-produced theatre play written in 1976 (called “The Kristal of Konos“), developed by Fissionchip Software and published by Addictive Games in Europe and Cinemaware in North America. The fact that Cinemaware picked up The Kristal for distribution in the US and Canada is a surprise in itself, as that kind of thing didn’t happen very often back in 1989 when this game was first released.

The Kristal opens with a short cut scene with a brief narration by the late, great Sir Patrick Moore (a famous English astronomer and TV presenter), which explains where you are (on a planet orbiting the twin stars Kree and Ma) and where in time this corresponds to Earth (roughly around the year five thousand). The rest of what is said is science fiction gobbledegook to be honest, and thankfully isn’t particularly relevant to the game.

The game begins with a short text explanation of who you are – a guy called Dancis Frake (oh come on!) – who seems to have a hangover and no recollection of what he did last night. The basic aim of The Kristal is to talk to other characters and try your very hardest to figure out what the hell this abomination of a game is all about, because the manual sure as hell doesn’t explain that, and playing the game doesn’t give you much in the way of answers either…

The Kristal is an adventure game controlled mostly with a joystick, although you do have to use some keys to activate certain actions, like talking to non-player characters, which requires text input through a type-in parser, or picking up or using items. The control system is clumsy at best, terrible at worst, and making headway in the game is almost impossible without a walkthrough. And even with a walkthrough: playing The Kristal is headache-inducing stuff.

If it seems like I’m being harsh on the game: I haven’t even started yet… Let me cut to chase: The Kristal is a badly-written piece of futuristic fantasy nonsense, full of terrible names, incomprehensible ideas and puzzles, and unforgiving minigames, that all meld together to make one of the worst gameplay experiences ever committed to floppy disk. Which is a pity because the game is decent-looking with some nice animation, and it could have been something special, but unfortunately it makes bad sci-fi films like Starcrash (1978) and Battle Beyond the Stars (1980) look like high art. Looking through reviews of the game from magazines of the past it seems inexplicable to me that it was given such high scores (91% in Zzap! issue 50, June 1989), which I find highly suspicious.

To drill down into the gameplay of The Kristal, what bothers me most about it are these issues: 1. the text parser is both cumbersome and unnecessary. Knowing what to type to get the results you need to progress is next to impossible (without a walkthrough). Asking questions in the parser, and punctuating them with a question mark, results in a null result (conversely: asking a question and leaving the question mark off at the end results in the question being understood, which I found highly annoying). 2. Space combat – a necessary part of travel between locations – is skittish and barely playable, and controlling the speed of your craft (an important factor in the minigame) is very badly implemented. Why not just use keyboard controls for speed changes, rather than joystick combos that don’t work? 3. Items that you found previously no longer seem to be in the same place in a different playthrough. 4. Waiting for an essential character to show up can take a long time. Sometimes essential characters just seem to disappear. 5. The sword fighting sections are pathetic. And 6. the literary backbone of The Kristal is amateurish and frankly laughable. The names of all the characters, the lore, the conversations, the backstory, and everything else about the written aspects of this game seem little more than bad fan fiction to me. “Dancis Frake“?! That tells you all you need to know about the quality of the writing we’re dealing with here…

Yes: The Kristal was based on a theatre play, but that play was never produced (so I read), and probably never would’ve been because it was so bad. And I think the person who wrote it wasn’t a very good writer and disappeared up his own backside, thinking: “I can’t make this play, but it would make a great video game“. The Kristal – as a literary work – is embarrassing, frankly. It’s certainly not as ‘high concept’ as the producers of the game seemed to have thought it was.

The Kristal was released in a big box, with a poster and a novella, and it cost £29.95 at the time of release, which was a lot of money in 1989, and I can’t help thinking that most of the game’s marketing budget was spent on bribing journalists for good review scores… Personally, I don’t know anyone who bought it, and most of my friends had 16-bit home computers at the time (as did I). The Kristal was released for the Amiga, Atari ST, and for MS-DOS, and my guess is that it didn’t sell very well at all, because it was too expensive, and also because it wasn’t very good. It reminds me of expensive flops like The Great Space Race and The Black Crystal, which were essentially poor games that were packaged in big boxes with a number of extras – at a high price – to make them appear more worthy than they actually were.

More: The Kristal on Wikipedia 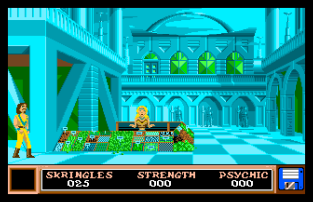 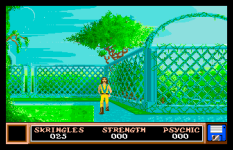 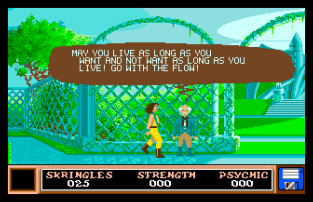 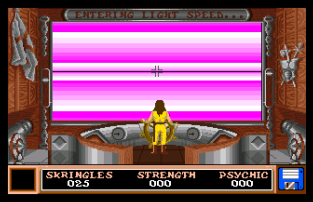 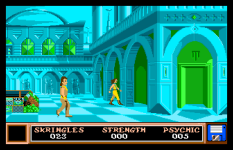 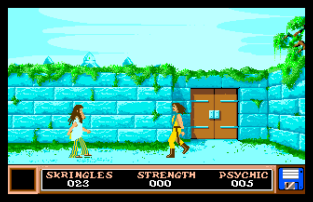 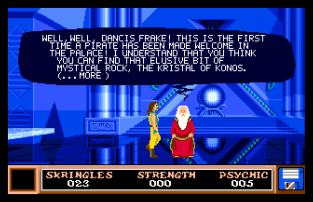 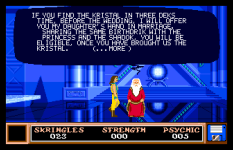 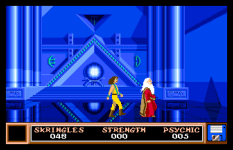 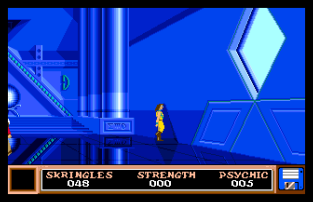 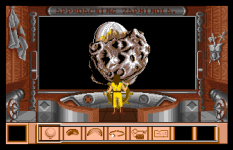 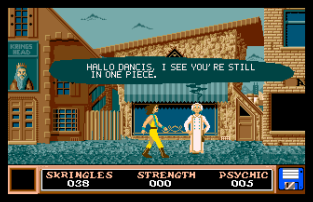 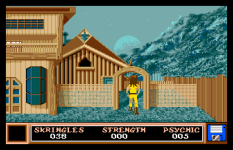 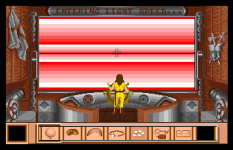 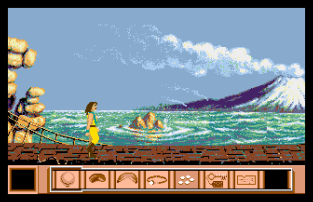 One thought on “The Kristal, Amiga”