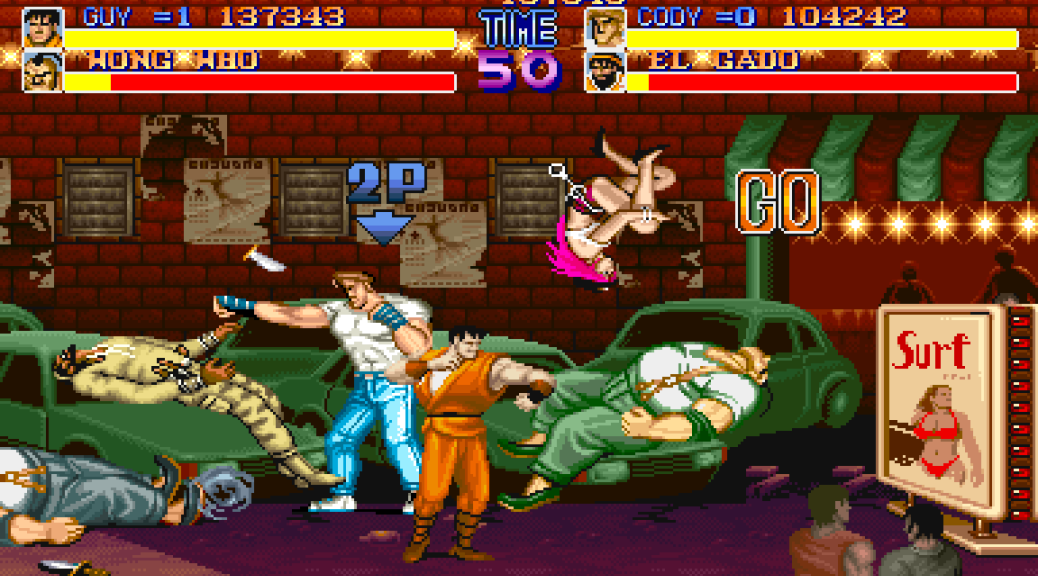 A side-scrolling beat ’em up released into arcades by Capcom in 1989, Final Fight was originally intended as a sequel to Street Fighter, but was eventually changed after the success of Double Dragon.

The rather trite story sees the mayor of Metro City, Mike Haggar, on a mission to rescue his daughter from the clutches of a gang of criminals called the Mad Gear Gang. Mike’s daughter’s boyfriend, Cody, and his friend, Guy, are also along for the fight.

Gameplay in Final Fight is fairly simple. You walk into an area, are attacked by various thugs, and must pummel them into submission before moving on to the next area and the next set of bad guys. Not all the baddies are unnamed fodder, though – many do have names (shown at the top of the screen, underneath your character’s health bar), could be considered as sub-bosses, and have larger health bars. There are also larger opponents, who appear at key points in the game who could definitely be considered as ‘bosses’. And then there are the ‘serious’ boss battles, like the ones inside the ring, against the sword-wielding, mask-wearing “Sodom”…

Various weapons make themselves available throughout the game – usually dropped by opponents – which the protagonists can pick up and use against the bad guys. While these are most welcome in the heat of battle, using them is a bit hit and miss and they are easily knocked out of your hand by an opponent.

There are six different stages in all. A bonus level sees you having to demolish a car as quickly as possible – something that appeared again in various Capcom fighting games, most notably in Street Fighter II.

One funny thing about Final Fight is that it was one of the first multiplayer beat ’em ups to feature ‘friendly fire’ – meaning: you can beat up your comrades, either accidentally or on purpose, if you want to! It certainly doesn’t help to accidentally (on purpose) ‘stab’ your allies, but it does happen and it is hilarious.

Final Fight is another arcade classic from Capcom with their trademark beautifully-drawn and animated graphics. In two-player mode, with another human playing, the game really comes into its own.