Another isometric action adventure from Ultimate Play The Game, this one with a Wild West theme.

Gunfright was first released in 1985 and uses the Filmation II Engine as first seen in Nightshade.

You play a sheriff in a small town called Black Rock who must hunt and kill a gang of outlaws who are hiding in it.

The game starts with a minigame – a shooting gallery type game – where money can be earned by shooting falling bags. The money can then be used to buy ammunition.

The main part of the game is similar to Nightshade – exploring an isometric, scrolling environment. Residents wander the streets and some are even helpful and point towards the outlaws. These residents have to be protected, though, as any deaths are penalised with fines.

When you find an outlaw Gunfright again switches to the shooting gallery game, only this time you must shoot the bad guy before he shoots you. You can wait for him to draw, or you can just plug him ASAP.

Graphically, Gunfright decent enough. It’s not as colourful as Nightshade was, but it does have character.

Gunfright was the first Ultimate-developed game to be published by another company. US Gold were the ones who released it, and not long afterwards they bought Ultimate out. So Gunfright is seen by some as the last ‘proper’ Ultimate game. 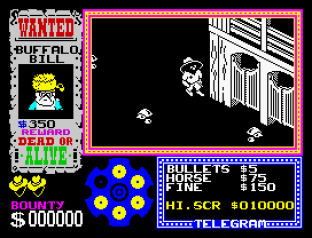 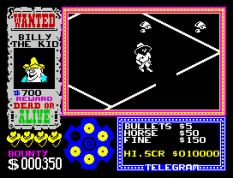 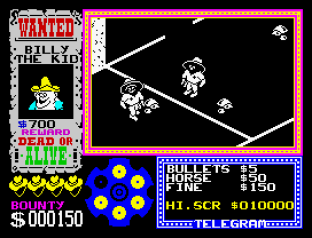