The Amstrad version of Ultimate Play the Game‘s Bubbler benefits from some extra colour, but plays pretty much the same as the ZX Spectrum original (ie. it’s playable, but insanely difficult).

The idea is: you play a fragile bubble and must explore five large, scrolling isometric levels. You jump around, shoot, avoid lethal hazards, collect corks, and plug-up bubble machines. Once all the bubble machines have been disabled the exit opens, allowing you to move on to the next stage. Which is easier said than done.

To obtain a cork you have to drop down one of the various trapdoors that are located throughout a level. When you do so the cork indicator fills in to indicate that you have one. Then you jump onto a bubble machine and it automatically corks it up for you. Repeat until all the bubble machines in a level have been corked.

Completing the first level is just about manageable without cheating. From level two onward, though, it becomes much more difficult because some of the trapdoors are actually devious traps that drop you to your doom. So you have to remember which ones are safe to go down. And the later levels are also much larger in size, which makes avoiding all the hazards more difficult.

It’s a pity Bubbler is so head-bangingly difficult, because I think that it’s a pretty decent game. It’s arguably Ultimate‘s best game, post Gunfright (and therefore after Ultimate had been sold to US Gold and the people who programmed the original, classic games were no longer there). It was first published in 1987. 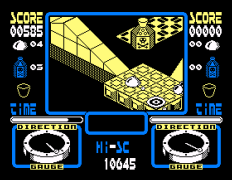 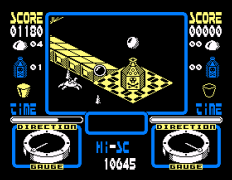 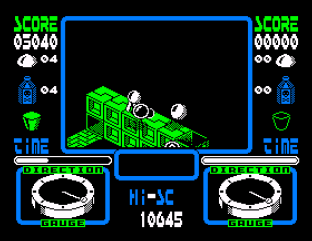 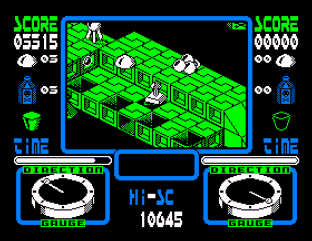