John Van Ryzin‘s popular H.E.R.O. (Helicopter Emergency Rescue Operation) first made its appearance on the Atari 2600 (aka Atari VCS), via Activision, way back in 1984.

The premise is simple: you are a guy with a helicopter rotor on his back and can fly through caverns of a deep mine, looking for trapped victims to rescue.

You have to be careful where you fly, though, because hitting certain things can kill you.

Every now and then you’ll come across an immovable wall, barring your way, and can drop sticks of dynamite to get rid of them. Avoiding the blast of your own explosives is crucial though. Oh, and you can shoot a short range beam out from your eyes too. Helpful for shooting spiders and suchlike. Don’t shoot a lamp though, otherwise the screen will go dark.

H.E.R.O. is classic 1980s video gaming. A simple, original idea, made fun by pushing the limited abilities of the Atari 2600 to their limits.

H.E.R.O. also appeared on many other 8-bit video gaming platforms too, including Apple II, ColecoVision, Commodore 64, MSX, and ZX Spectrum. 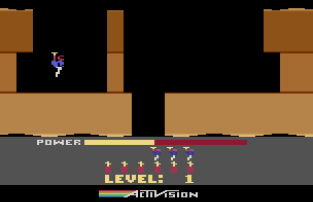 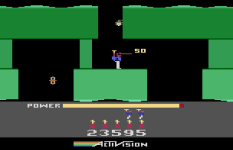