Ultimate Play The Game‘s amazing Jet Pac is an early ZX Spectrum classic, first released onto an unsuspecting world in 1983.

And it really did blow the world away back in the early ’80s. No one had ever seen such graphics on the humble Speccy. And the whole game was squeezed into just 16K!

Jet Pac is a simple game: shoot and avoid the baddies, while grabbing parts of your spaceship and building it up, then filling it full of purple fuel, and flying it off.

But – in spite of its simplicity – Jet Pac is compelling because it is so beautifully presented and playable.

Jet Pac was definitely an indicator of greatness, and Ultimate Play The Game more than proved that with their subsequent releases. 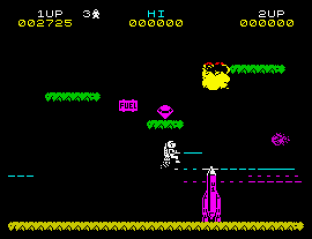 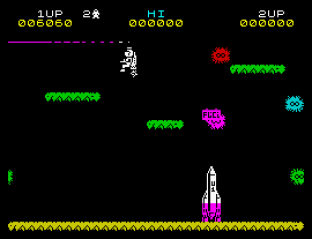