Thanatos is an unusual side-scrolling action game designed by Mike Richardson and programmed by Rod Barrington for Durell Software in 1986.

The game is unusual because you play as a dragon… Yes, that’s right: a dragon! And not any old dragon, but as “Thanatos the Destroyer” – a fire-breathing behemoth with a heart.

That heart is actually shown on-screen as a kind of life meter, but the “heart” I’m referring to is the dragon’s desire to do good – specifically: to rescue and help the good sorceress, Eros, to defeat the evil Lord of the Underworld.

Once Thanatos rescues Eros she then jumps onto his back and rides him like a… erm, dragon, and the next task is to help her find her spellbook, then carry her to the cauldron so she can cast her world-saving magic.

Flying over the battlements and attacking the enemy is fun in Thanatos. While it’s not immediately obvious what you’re supposed to do it is fairly obvious that the dragon is meant to destroy everything in sight (well, almost everything in sight) as well as avoid touching things like spiders and other beasts. There’s even a double-headed dragon that you go up against!

If Thanatos‘s heart meter drops too low he will die. He can top it up again by landing and resting, if he’s not being attacked. The meter on the right hand side (the one that looks like a glass of wine) is Thanatos‘s ‘Flame’ store. This depletes as he breathes fire at enemies. It can be topped up again by eating witches! Which is hella funny… 🙂

Considering that it fits into only 48K of RAM, Thanatos is an extraordinary game. Whether you like dragons or not! 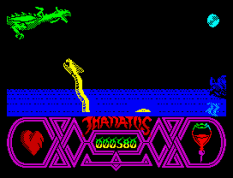