If you can stop laughing at the amateurish loading screen for a few minutes you might find a reasonable conversion of Konami‘s infamous Green Beret arcade game here. Emphasis on the word “might“…

Alternatively, Imagine Software‘s Commodore 64 conversion of Green Beret could be viewed as a bit of a mess. It depends on your point of view. Zzap!64 magazine gave the game 93% and a Sizzler award back in the day (issue 16, August 1986), but I have to strongly disagree with their assessment of it.

Graphically, the game is lacking. Use of colour is okay, and the animation is not bad, but the size and definition of the sprites and backgrounds is a little weird. Everything looks chunky and too big in my opinion. The scrolling is fast and smooth, at least.

Gameplay-wise, Green Beret is just pathetic. One thing that bugged me a lot was the speed of enemy bullets. They seem to move way too fast, and you’ve got next to no chance of ducking to avoid them if they’re fired anywhere near you. And by that I mean anywhere within half a screen away from you. Which makes the game very frustrating to play. To compound that, the collision detection when stabbing enemies is dodgy too. Especially when ducking. Numerous times I thought I should’ve killed an enemy, but it didn’t happen and I got killed myself… The green ‘kung fu kick’ enemies are extremely difficult to avoid; parachutists fire bullets too often and too quickly; enemies spawn too quickly and too frequently, and the whole difficulty of the game is stupidly unfair.

Nah, I’m not having it. The Commodore 64 conversion of Green Beret is an amateurish mess and I’ve always thought that since I first played it back in 1986. The Zzap!64 review is bullshit and they got it seriously wrong… Green Beret on the C64 plays like it was rushed in development and didn’t get the playtesting that it needed. It’s way too hard (much harder than the original arcade game, which is saying something since that is a tough cookie) and it looks like crap (just look again at that loading screen…)

Yes, Martin Galway‘s loading music is decent enough, but there’s no music during the game itself (other than a drumbeat and a short jingle when you die) so the audio doesn’t come to the rescue while you’re playing the game. 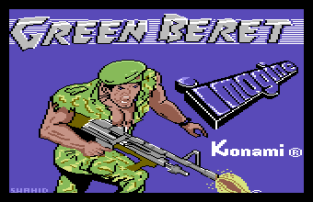 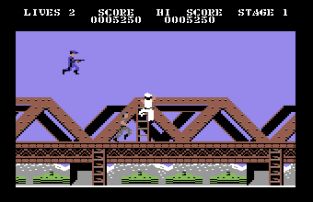 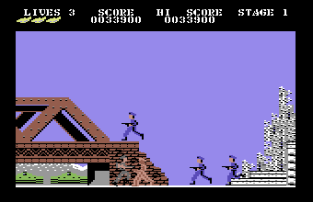 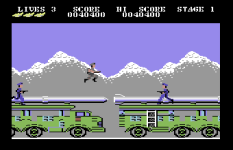 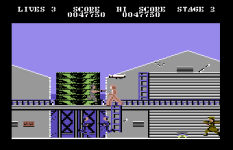 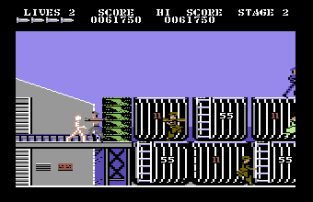 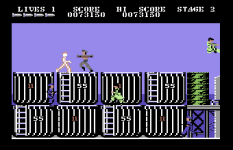 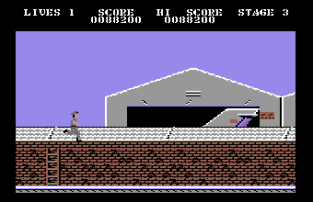 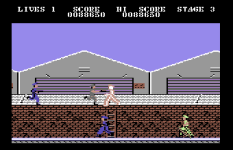 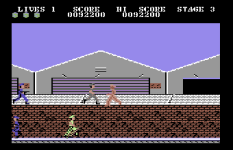 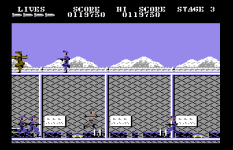