Released a year after the original Mortal Kombat, Mortal Kombat II took arcades by storm in 1993, with its mix of beat ’em up action and absurdly violent parody.

Mortal Kombat II was developed by Midway, with pretty much the same designers as on the previous game, and it therefore looks and feels very similar to MK.

The aim is the same as previously: battle your way up an increasingly more difficult ladder of opponents, in order to reach – and defeat – the evil Shao Khan, the Evil Emperor of Outerworld. And – before you can face him – you must first defeat his bodyguard, Kintaro, who is represented as a stop-motion animated figure, whereas all the other characters are digitised from video.

Mortal Kombat II is definitely more refined than its predecessor. While the controversy was raging about the first Mortal Kombat, the developers at Midway went out and bought pro camera equipment and re-assembled the cast to ‘film’ the even more ambitious and over-the-top sequel.

Each playable character has two hidden “Fatalities”, which are: hidden finishing moves that result in a particularly gruesome outcome. Finding these is a major part of the fun.

This being a six button game, basic combat in Mortal Kombat II does take some getting used to, but it pays to learn how to block because the AI on opponents is very aggressive. To beat the game you’ve got to learn what strategies are needed to beat each opponent.

Mortal Kombat II is a classic arcade fighting game from Midway that is fast, funny, and hugely challenging. Mortal Kombat 3 – released in 1995 – is arguably even better. 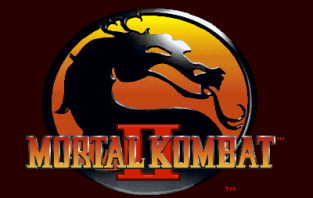 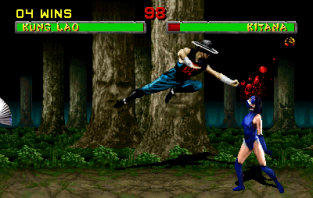