Written by Tony Crowther and published by Mirrorsoft in 1987, Zig Zag is a weird and wonderful isometric shoot ’em up where you fly a wedge-shaped ship around a maze collecting crystals.

What makes this game different to others is that you basically navigate the maze by bouncing off prisms, which change your angle of travel by 45 degrees. By hitting prisms at certain points in the maze you can work your way through it, indicated by the colour changes in the level. There are also switches (which turn parts of the maze on and off), which can be touched (or shot, if on a wall) to activate. You have to be careful with switches, though. If you hit a switch twice it will turn on and then off again – you basically have to remember which switches you’ve already hit.

At first Zig Zag might seem a little confusing, but a bit of practise will probably make you realise that missing certain prisms (and rebounding off a prism afterwards) is usually the key to opening up the maze. So you wait, and count off the number of prisms you’ve passed, in order to hit a certain one, to go down a specific corridor.

A variety of aliens patrol the maze and a collision with them (or their bullets) will lose you a life. You can shoot them (and their bullets), though, before they can damage you. There’s also a shop (if you can find it) where you can buy power-ups, maps, extra weapons, and even extra lives.

Zig Zag is a relatively simple game, but it is an excellent one. It’s kind of a progression of the Zaxxon theme, but one where you literally bounce off the walls to get to where you’re going. And if you know what you’re doing, it’s challenging and fun. 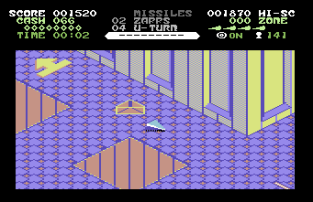 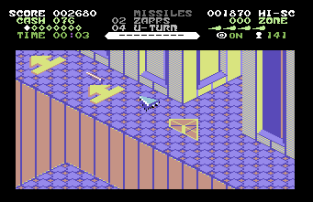 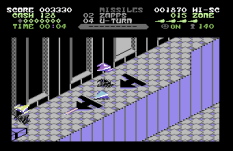 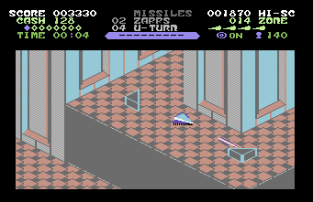 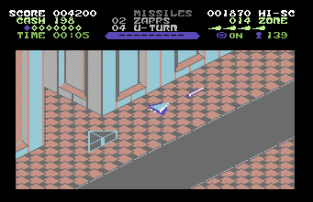 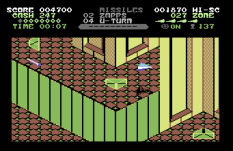 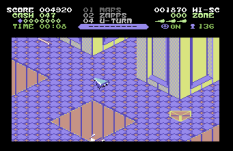 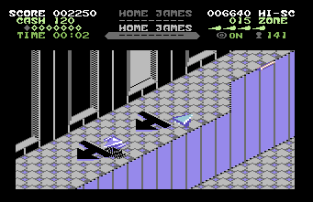 One thought on “Zig Zag, Commodore 64”