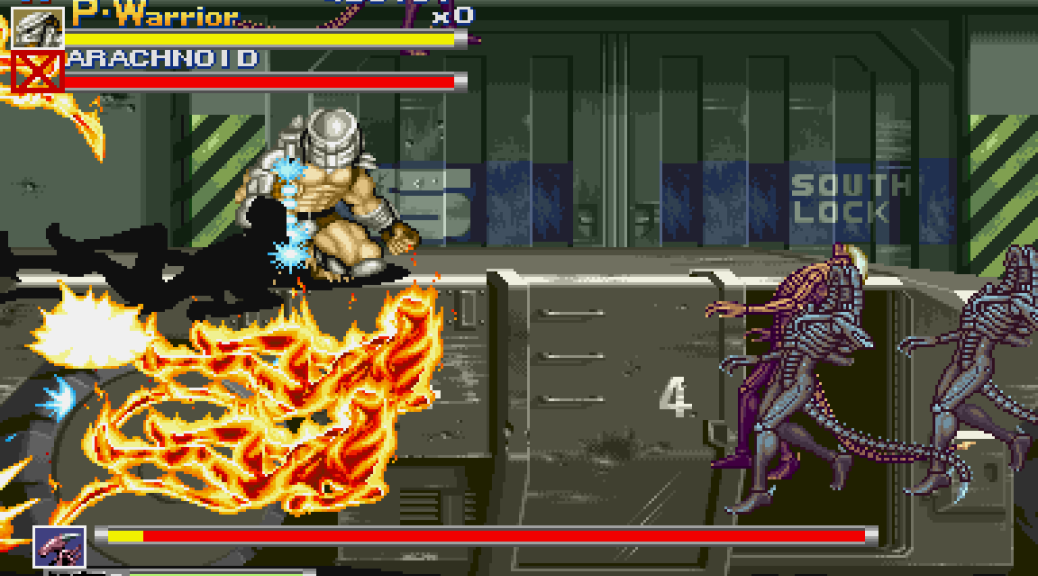 This 1994 arcade game from Capcom is a ridiculously over-the-top beat ’em up in the style of Cadillacs and Dinosaurs – side-scrolling, all-action, with gigantic sprites jumping around all over the place.

Capcom apparently made this game based on an early draft for a film adaptation of the Aliens vs. Predator comic book series. That draft was later rejected by 20th Century Fox and the film didn’t get made (at least not until much, much later), but the arcade game still came out in 1994.

In the game you can play as a Predator, an Alien, or as a barrel-chested Arnold look-alike called Major D. Schaefer. And basically you have to punch and kick your way through endless waves of baddies. As is the norm in these kind of games, you can also pick up weapons, and throw barrels at adversaries.

Aliens vs. Predator is fairly tiresome overall. Rescued by simultaneous multiplayer and some very nicely-drawn graphics. Obviously a lot of work has gone into this game, by some seriously talented people, although the end result is a bit half-hearted and the gameplay a bit too repetitive to be considered a classic. More a curiosity than anything.

More: Alien vs. Predator on Wikipedia

One thought on “Aliens vs. Predator, Arcade”