Geoff Crammond’s Stunt Car Racer on the Amiga is a blistering game!

In fact: on all systems Stunt Car Racer appeared on, it worked really well.

The simplicity and feel of driving crazy courses was always consistent throughout all the Stunt Car Racer conversions, although there was something special about the Amiga version that made it stand out from the rest. It was the fastest and the smoothest at the time of release, 1989.

With multiplayer and computer link options.

Starting out in division four.

The tense wait before being dropped.

Best be careful here – there’s a time and place to pass.

Won the league cup! Now I move up a league.

On the back of an opponent after a jump. 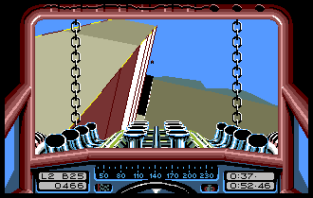 Being winched back on in Stunt Car Racer.

In Stunt Car Racer if you fail the people forget you.

Blasting the turbos to try to overtake on the bend!