Dark Side is the second game in Incentive Software‘s famous “Freescape” series, and is arguably best represented – at least on 8-bit machines – on the Amstrad.

The 1988 Amstrad version is both faster, and more colourful, than the ZX Spectrum original, and is one of the earliest video games to offer a full 3D environment to explore.

More: Dark Side on Wikipedia

Dark Side was one of the first games to allow the player to explore a 3D world freely.

Most of the puzzles in Dark Side involve shooting key objects to trigger things.

If in doubt: shoot everything.

I’ll see you on the light side of the moon. 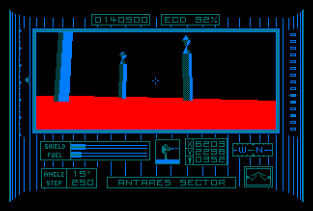 I don’t really know where I am. Which is why mapping is so important.

The player is equipped with a jet pack and can fly vertically, as well as rotate the screen (though for no good reason but to disorient yourself).

Found some huge buildings to explore on Ganymede.

An overhead structure in Iapetus Sector.

3 thoughts on “Dark Side, Amstrad CPC”