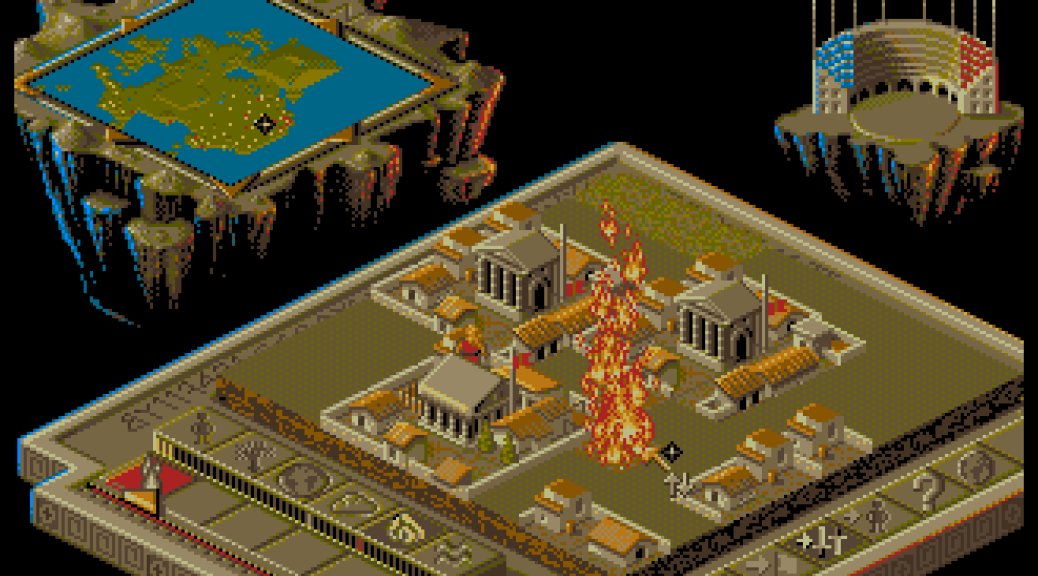 Bullfrog Productions‘ 1991 sequel to Populous, Populous II: Trials of the Olympian Gods is a beautifully-crafted follow-up, retaining – and even improving on – the genius of the original.

I always rated Populous very highly, and Populous II is even better.

Populous II plays similarly to the first game, with some subtle differences. You’re basically raising and lowering land for your followers so they can build on it, like before. And when your followers build enough things you can then go to war to crush your opponent.

Also like before: you – as a God – have a number of disasters available at your fingertips (called ‘Divine Interventions’), like earthquakes and volcanoes, but also news ones like Plague (ouch), Fungus, Batholith (rocks shooting out of the ground), and Tidal Wave. They’re supposed to be there to cripple your opponent, but can also cripple you too if you don’t use them wisely.

Divine Interventions, though, are directly linked to your Manna level and will only work if you have enough in the tank. The level is shown as the yellow arrow on the left side of the “board”.

Beating a level gains experience points which works towards unlocking new Divine Interventions. There are 29 divine interventions in total in the Amiga version of Populous II.

Another key part of Populous II‘s gameplay is the creation of “Heroes”. They act similarly to the Knights in Populous, although in this game they will transform one of your leaders into a hero from Greek mythology, who will then go out and cause havoc by hunting down your opponent’s ‘walkers’ and killing them. And of course, if your opponent is strong enough, he can do the same to you too.

The ever-useful map in the top left-hand corner can be shown full screen, with a key press, if required, and the miniature amphitheatre in the top right corner of the screen shows the populations of the two warring opponents growing. Whoever develops the largest population first usually wins.

Populous II has over 1000 maps to play, which is a serious long-term challenge if you want it.  Yes, it can get a bit repetitive – all games can – but it’s such a polished and interesting game that it’s easy to just dive in and out for a quick game at leisure if you want, or try other levels if you’re stuck.

Populous II is still available to buy today, which is pretty good for a twenty year-old game. It’s a classic Bullfrog sequel with beautifully-polished graphics and audio, and absorbing, addictive gameplay. Still worth playing today. 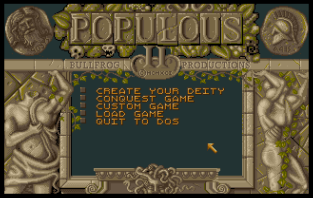 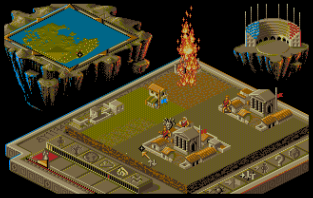 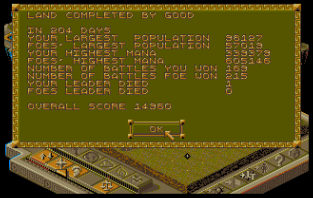 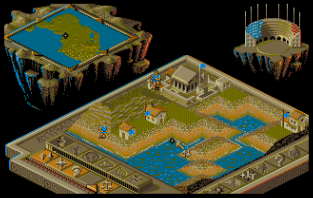 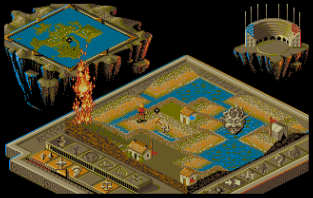 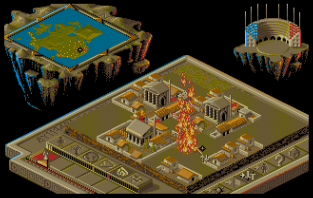