The sequel to the classic Booty was published by Bubble Bus Software in 1986. It was again designed and programmed by John F. Cain.

I must admit to never having played Moonlight Madness before, even though I bought and enjoyed Booty when I was a youngster. And, not having played it was probably for the best…

Moonlight Madness is very disappointing overall. The game follows the same format as Booty – collect keys to open doors – only this time the route through the game is much more convoluted and confusing. What makes it more difficult are the doors, which warp you all over the place and make mapping essential. There are also buttons strewn around the levels which – when pressed – usually activate a bridge or a door, or something or other.

One major difference over Booty is the fact that the main character (the cabin boy) can actually jump this time, which he couldn’t do before. It doesn’t really make the game any easier though because falling too far results in death and it’s very easy to do when you’re jumping. Mr. Cain I think missed a trick by not making the jumping more important and death less easy to come by in this game. Moonlight Madness – like Booty – is very unforgiving when it comes to movement, which I think dates the game badly.

Also: it’s not exactly clear how you score points. I played Moonlight Madness for an hour and didn’t score a single point. This game – you could say – is pointless…

The graphics are slightly better than those seen in Booty, although the hideous black colour clash is still present. There are a few nice graphical touches, though, like the eyes that follow you, and the vacuuming women. There’s a continuous tune this time too, although it’s pretty annoying and can be turned off by pressing ‘m’. 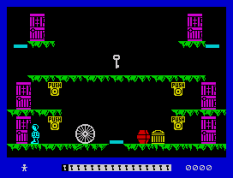 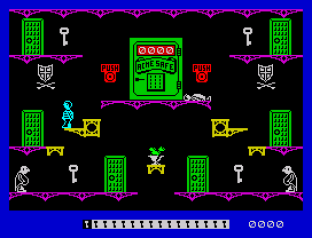 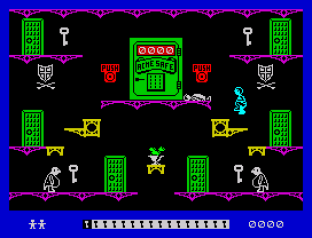 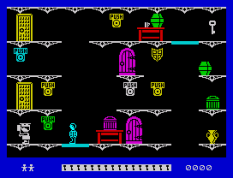