It might look basic, but this early ZX Spectrum game is still a great game to play now.

Splat! was first released 1983 by Incentive Software and is a maze game where the maze is constantly moving, and you have to avoid being crushed by the side walls. You being: a little animated ‘X’ style graphic, called “Zippy“, who is actually quite characterful for a little ‘X’.

There’s even some sampled speech to make him even more quirky (it was a huge thing back in 1983, digitised speech).

Splat! is one of those great little games that is easy to play, but hard to master, and I don’t think anyone’s beaten it yet, in terms of bettering it. 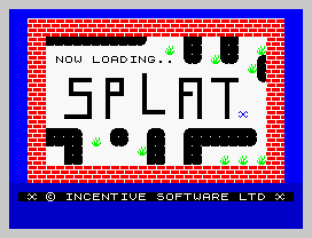