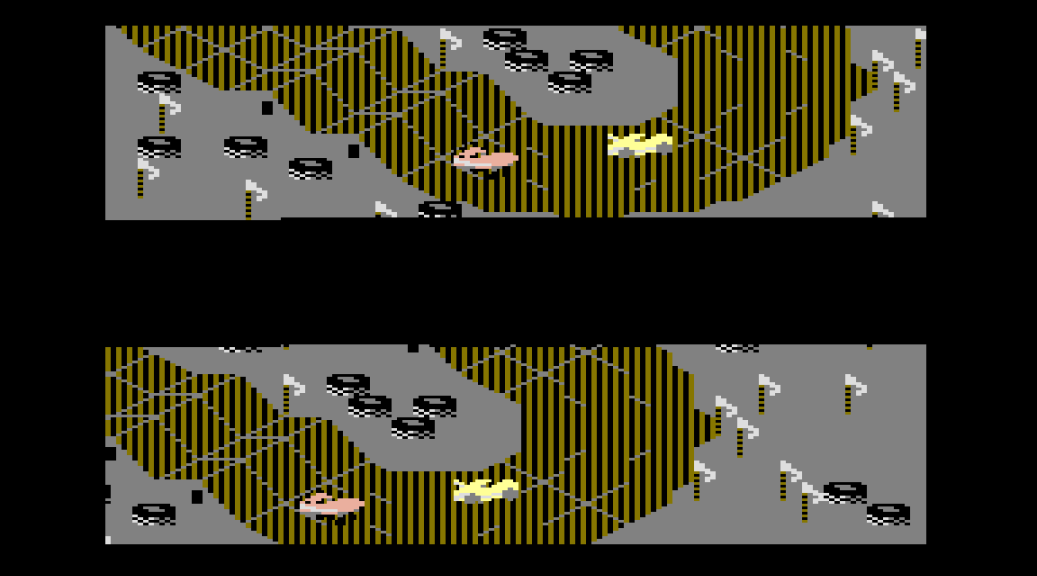 The game uses split screen gameplay to great effect, and has pretty good artificial intelligence for the computer-controlled cars too. Which is the secret to the success of this game: you can get a pretty good race off the computer if you have no one else to race with. As well as there being a really good track designer that is dead simple to use.

If you’re playing Racing Destruction Set in VICE, use the Warp feature (Alt+W) to hurry past the interminably long load times.

Number of laps left indicated on the start/finish line.

This track features small jumps and a few chicanes.

Player one always plays in the top window. The computer or Player two in the bottom window.

The racing in Racing Destruction Set is simple but fun.

There are a number of different vehicles to choose from, including Formula 1 cars.

The full list of tracks supplied with the main game. You can make your own though.

Long drops don’t do the cars any good. Take them slowly. 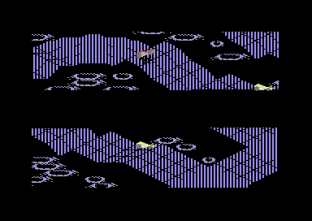 Red car behind at the moment.

Race Options. Destruction rules mean you can lay mines or drop oil, or bash your opponent off the track to gain advantage.

Racing Destruction Set was a precursor to Micro Machines and a major influence on Rock N Roll Racing by Blizzard.

Quick off the starting line it’s neck and neck…

Coming up to the first corner and red drops behind. Has he got a problem with the car?

A motorbike versus a Baja Bug. You can mix and match vehicles as you like in Racing Destruction Set.

Jeeps racing on a narrow track.

Red car hits a mine and is thrown into the air, giving yellow the advantage.

Making a new course in the editor.

Completed the new course – now to test it out.

You can also choose between three different surfaces. Pavement, dirt and ice.

This grey surface is dirt on the Track graphics setting.

You can tweak engine CC settings and change the tyre settings too.

Another twisting masterpiece is made!

Testing my new course out with the Abstract graphics setting.

This track features an icy hill to climb.