This incredible “indie” dungeon crawler absolutely drips atmosphere and is bloody terrifying in places! It’s a heck of a challenge too…

Legend of Grimrock plays very much in the mould of Dungeon Master, and other first-person, tile-based RPGs, but it does it so much better than almost all of the others.

It’s like the game’s developer – Almost Human – looked at every other Role-Playing Game that ever came before Legend of Grimrock and “consolidated” all the best ideas of the genre into their game. Leaving out all the bad bits. You can even use your own image files for your characters, which is a feature I loved, and hadn’t seen in a game of this type before.

At times the going is very difficult – the pace is extremely fast (compared to, say, Dungeon Master), and the monsters are ravenously enthusiastic for your blood. You have to think and act quickly to survive. You have to listen carefully too, as you can often hear death coming long before you can see it. As is the norm now with these types of games: all the monsters have unique sound effects so they can terrorise you from afar – before killing you dead.

And there’s a sequel too. Which is just as good – if not better – than this first game.

Legend of Grimrock is top quality gaming and Almost Human can take great credit for their endeavours. It will go down as a classic I think!

The unassuming title screen. Well, not very unassuming. Quite ominous!

During sleep you get strange messages in your dreams. They seem to be friendly…

Monster explodes in a puff of embers!

Running over a series of collapsing platforms. Don’t fall down!

Tentacles – coming out of a pit and swiping at me. At least they can’t move closer! 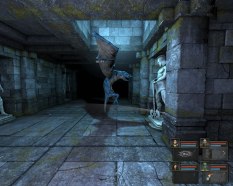 Attacked by a Wyvern! It can fly over pits, which is annoying.

These giants crabs are tough and can move very quickly. You have to be on the ball not to end up stuck in a corner with one.

This place is crawling with fast-moving Scavengers, which are deadly in numbers!

At a junction of gates. A little respite from all the fighting. Maybe.

Green Slime takes 26 damage from one of my lightning spells.

The deeper you go, that harder Legend of Grimrock becomes…

Excuse me Mr. Tunnel Ogre. Will you mind getting out of my way? Please?

The 3D graphics and lighting/shadow effects are amazing in Legend of Grimrock.

A scary-looking Goromorg trying to shield itself from my blows.

A terrifying Warden, being kept at arm’s length by a pit. 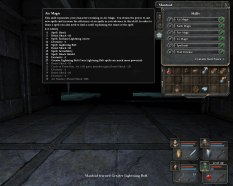 Skill advancement branches out, and you have to make your choices.

A giant fly type monster with a silly name. They call it a Shrakk Torr. Take that, Shrakk Torr! Damn! Missed!

Oh my God, this horrible thing is taunting me!

My stats. I’ve moved over 35,000 tiles. Mostly while leaking poo from my trouser leg.

Importing my own character portraits. This time I’m going dungeon crawling with The Trailer Park Boys!

Killed that monster, but now the lights have gone out.

Ricky found a green gem in the mouth of this stone wall carving.

These Undead Soldiers are slow-moving, but relentless. And bloody frightening!

Everyone dead in Legend of Grimrock. Game Over!

5 thoughts on “Legend of Grimrock, PC”