A colourful helicopter action game, Cyclone was created by Costa Panayi – an early pioneer of ZX Spectrum games design, and an alumni of The University of Salford – and is a challenging race to pick up crates from a series of islands that are caught in the grip of a powerful weather system.

If you fly too close to the eye of the cyclone, your chopper can be brought down. So you have to keep an eye on the wind force meter. If it gets too hairy you can land and wait for the danger to pass. But you’re up against a time limit so can’t wait around too long. You can also rescue people for extra points. 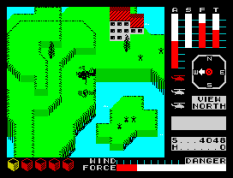 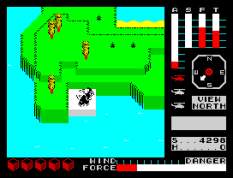 One thought on “Cyclone, ZX Spectrum”