Scuba Dive (Durell Software, 1983) features such a simple game idea, but one that works exceptionally well on the ZX Spectrum.

Diving deep down, past guardian octopus, and into a complex series of underwater caves looking for treasure… It’s tense stuff, as you swim as quickly as possible on the lookout for pearls, treasure chests, and air refill stations.

Bang your head on a rock and you lose what you’re carrying. And to score points you have to return your plunder to the boat floating on the surface. It’s a tall order, but Scuba Dive is very playable, so it’s fun at least trying.

Level 1 is the easiest level, with fewer sharks and predatory fish (touch one and you’re dead), and Level 4 is so insanely jam packed with deadly creatures that there’s a question over whether it’s possible to progress at all.

Scuba Dive is a must-play Speccy classic. Forget the Commodore 64 version – it’s absolutely terrible. ZX Spectrum Scuba Dive is the one to play. 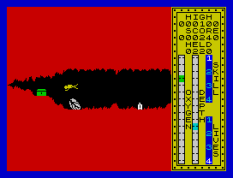 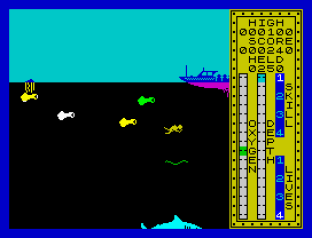 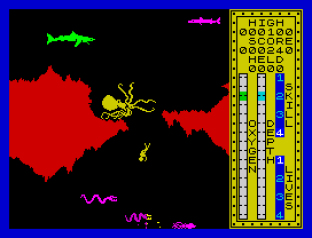