Jeremy Smith and Peter Irvin‘s groundbreaking Exile first came out on the BBC Model B in 1988 and was later converted to other systems.

Of all the versions of Exile I’ve played I’d have to say that the Commodore 64 version is arguably the best. Because the graphics are so nice. Because the gravity, inertia and feeling of flying around on a jet pack, in a free form, windy world, are just so good – so ahead of their time.

The controls are a bit weird (for picking up and using objects), granted, but the speed with which your man zips around, and the control you can take over him (if you know what you’re doing) is absolutely tremendous.

Descending lower and lower into the caverns, the adversaries become more vociferous in their aggressiveness, many can fire rockets at you, so you’ve got to be on your toes. A quicksave slot in a emulator helps, because playing Exile without reloading is marginally less fun than messing around and experimenting with the in-game physics. 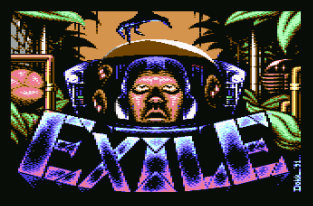 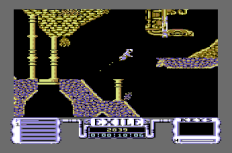