Dig Dug is a cute arcade digging game from Namco that was a cult hit during the early to mid-1980s. It was first distributed into arcades in 1982 and was much cloned by other game developers, and was also officially ported to many home systems of the time, including for the Atari 2600 and Mattel Intellivision (among many others).

The aim of the game is to tunnel underground and to kill all the monsters by inflating them with a pump. You’re being pursued by “Pooka” and “Fygar” and these will float through the ground and come after you, so you have to get them into cleared areas so you can insert your pump into them, pump them up, and ‘pop’ them. You can also dig under rocks to drop them onto monsters. You have to be careful, though, because Fygar (the green dragons) can breathe fire and will burn you from a distance if you’re caught in the flames, so there’s an element of timing and luck to dealing with them.

Food items appear in the middle of the screen if two rocks are dropped, and can be eaten for bonus points. Enemies speed up as the game progresses, but the levels don’t change that much. Also: the final remaining enemy can leave the level at the top of the screen, which I never did understand. For every round you complete, an extra flower appears at the top of the screen. And that’s about all there is to Dig Dug.

Dig Dug is a very simple game (arguably too simple), but is playable and somewhat compelling – if you like early arcade games, that is. If you don’t, then it’s unlikely to change your mind. It is a cult classic, though, and is fondly-remembered by those who played it back in arcades in the early ’80s.

Atari licensed the game for distribution in English-speaking territories, which is why you’ll see their name in some versions of the game, rather than originator Namco. Namco created Dig Dug, though. Not Atari.

Various sequels to Dig Dug have appeared over the years, including Dig Dug II in 1985, Dig Dug Arrangement in 1996 (available only on the compilation arcade game, Namco Classic Collection Vol. 2), Dig Dug Deeper for the PC in 2001, Dig Dug: Digging Strike for the Nintendo DS, and a Japan-only MMO, called Dig Dug Island, for the PC in 2007/2008. Dig Dug is also the predecessor to the Mr. Driller series of games, which feature similar digging gameplay. 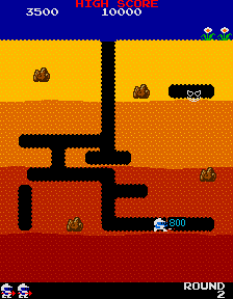 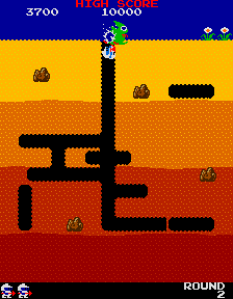 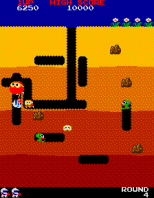 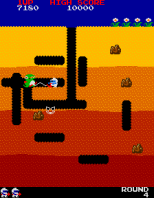 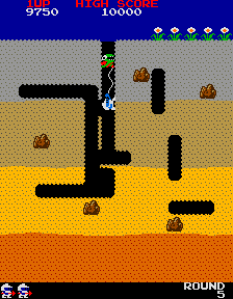 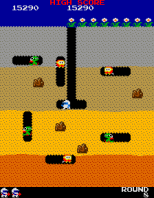 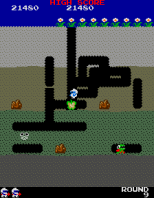 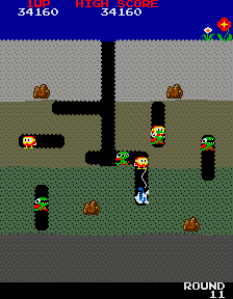 One thought on “Dig Dug, Arcade”