Mutant Monty looks a first glace like a Manic Miner clone, but it’s actually more of a maze game than a platform game. The main sprite certainly looks like Miner Willy though…

Written by Karl Jeffrey and published by Artic Computing in 1984, Mutant Monty is all about collecting gold within a maze of 40 different screens. Each screen is littered with hazards, but Monty must avoid them to pick up every piece of gold and open the exit to the next screen.

Monty himself kind of floats, rather than walks, and it’s simply a case of using up, down, left and right to control him. The fire button isn’t even used. Timing is the key to success.

Mutant Monty might not be one of the best games on the Spectrum, but it is playable, has character and charm, and is quite challenging, so is worth a look if curious. 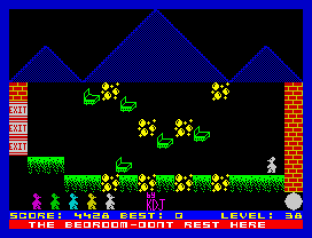