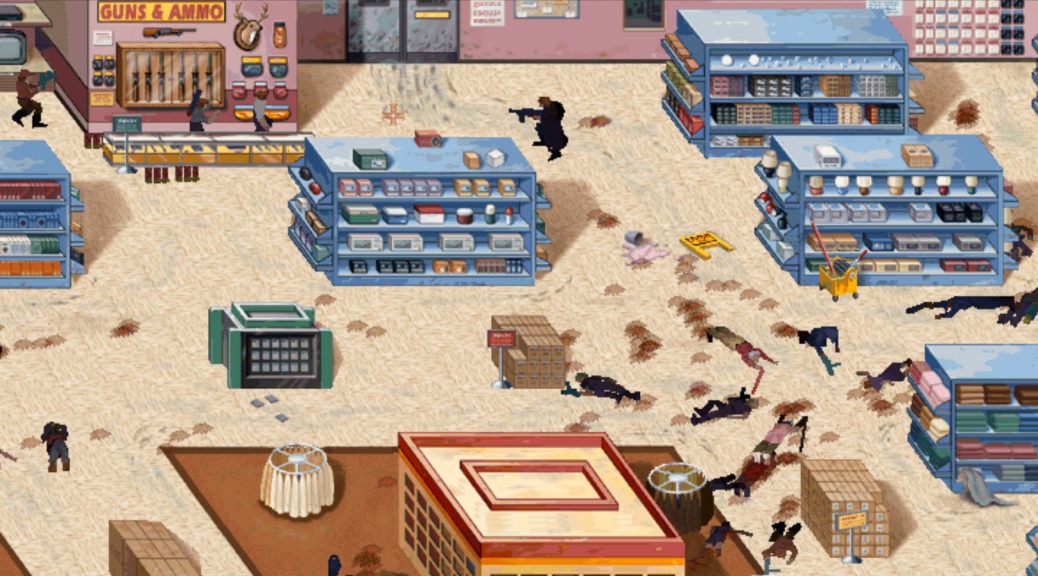 Postal is an infamous, tongue-in-cheek, highly controversial shooter that satirises the process of “going postal” – a phenomenon whereby an individual ‘breaks’ and goes on a killing spree (called thus because “going postal” was once, in America, often associated with postal workers). It was developed by Running With Scissors and first published by Ripcord Games in 1997. The game – like every entry in the Postal series – is mindless, in poor taste, and designed to cause outrage, because outrageous things draw attention to themselves. In Postal‘s case it drew the attention of politicians who tried to ban it.

In truth: Postal is no worse than many other shoot ’em ups, although the dark humour running through the game is both purile and somewhat grim. You play as “The Postal Dude” who has been evicted from his home. He believes the US Air Force has released an airbourne chemical agent onto his home town of Paradise and decides to fight his way from his house all the way to the Air Force base to uncover the “conspiracy” (which is somewhat topical in this day and age).

It’s a ‘twin stick’ shooter at its core, and the aim is to blast your way through waves of policemen who are trying to stop you, and lots of innocent bystanders. The Postal Dude makes crude wisecracks as he murders his victims, who are often seen crawling along the ground before expiring.

The Postal Dude can collect new weapons and must also continually pick up ammunition so that he can continue firing. He can use parts of the landscape (like trees, buildings, cars and fences) as cover and must always be on the move so that rocket-firing and grenade-throwing cops aren’t able to target him.

Graphically, Postal is simply hideous. The backdrops look like they’ve been drawn by a lobotomised chimp and coloured by a two year-old who’s just discovered the airbrush function in Microsoft Paint for the first time. The animated characters are blob-like and indistinct and the information panel items look like sketches that have been drawn by a person with a pencil clenched between their buttocks… Few games, I think, have ever looked quite as bad as Postal. The amazing thing is: the number of people who apparently worked on the game… What the hell were they all doing? Because this certainly doesn’t look like a game that a lot of people worked on…

Gameplay-wise: Postal is not terrible, but it’s not great either. You control The Postal Dude with the W, S, A, D keys and his aiming crosshair with the mouse. You press the number keys to change weapons. It’s not an ideal system but it works okay. When you’ve cleared enough hostiles in a level you must then press F1 to go to the next level, which is a bad idea (why not just end the bloody level and it take you there? Even in 1997 pressing F1 to go to the next level would’ve been viewed as weirdly archaic and unnecessary).

Postal: Classic and Uncut (known as Postal Plus in North America) is free to download and play from GOG.com (probably because they realise that no one would actually pay money for it). The 2016 HD remake, called Postal Redux, is also currently available on Steam.

On 28th December 2016 the source code for Postal was released by Running With Scissors under a GNU GPL-2.0 license. Postal was also made into a movie by Uwe Boll in 2007. Anyone who’s seen any of Boll‘s films will know what that means…

One thought on “Postal, PC”