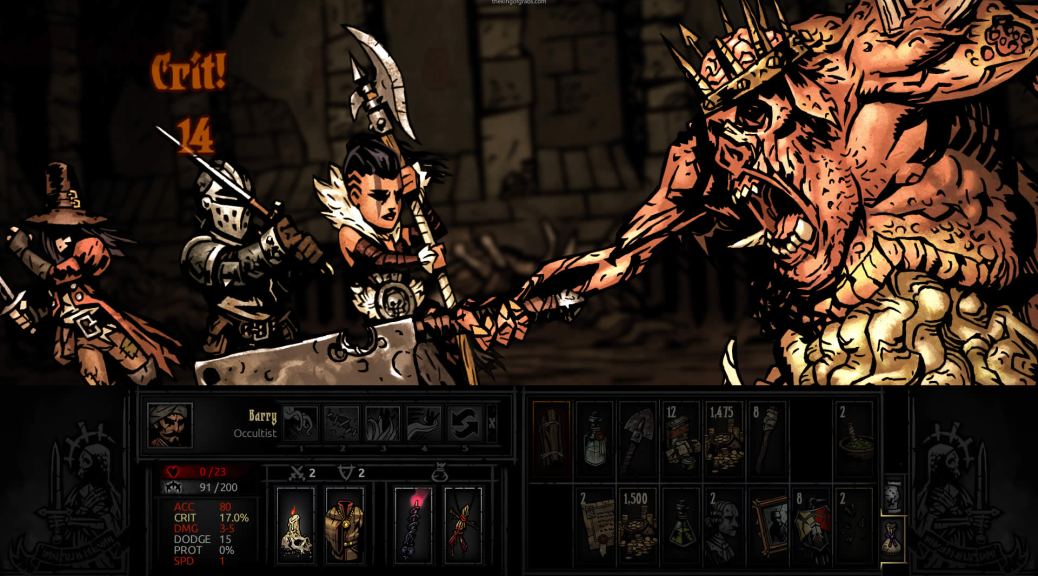 Darkest Dungeon is a Roguelike Role-Playing Game in which you control a party of four heroes who must fight monsters through a series of procedurally-generated dungeons. It was developed by Red Hook Studios and was first released in 2016. It is currently (at the time of writing) available for Windows, Linux, Macintosh, iPad, Nintendo Switch, PlayStation 4, PS Vita and XBox One.

The game begins with you inheriting an estate from an ancestor, and this serves as a hub from which your operations commence. You soon discover that your ancestor, while excavating the catacombs beneath the estate, has released horrific, evil creatures upon the world,
so you must recruit a roster of adventurers and mount expeditions to rid it of these vile inhabitants.

Darkest Dungeon is a mix of real time movement and turn-based combat and the game is categorised by its brutal difficulty. Each hero in your party has an individual stress level that changes during battle. They can gain afflictions that hamper (and sometimes enhance) their performance, depending on your actions. Darkest Dungeon is not a game where you can become attached to your characters, since they can easily die during combat and fill up The Graveyard (a screen in your estate that shows fallen heroes). You can treat your heroes – between missions – in The Sanitarium, in the hope that they will recover, but it means taking them out of action while they rest.

From the estate screen you can access various other services, such as shops (that buy and sell useful goods), a guild (where you recruit new adventurers), a blacksmith (where you can upgrade weapons and armour), a tavern (where you can drink, gamble, and partake in pleasures of the flesh), and an abbey (which increases the effectiveness of stress treatments). Occasionally you’ll also be paid a visit by nomad wagons that offer the chance to buy rare goods.

At first you only have one course of action: to explore The Ruins, and after completing the initial quest it then unlocks access to three more areas: The Warrens, The Weald, and The Cove. Each of these four areas present an increasingly more difficult route into the catacombs and a variety of themed monsters, and bosses, to fight on your campaign. As time passes your heroes gain experience, new skills, and the baggage of war that sometimes holds them back. That is: if you manage to keep them alive. If you’re getting pummelled in battle it is possible to withdraw and fight another day, which is sometimes the shrewd thing to do. You can’t always escape, though.

Combat in Darkest Dungeon is often dramatic and sometimes upsetting – especially when surprising things happen, like when one of your heroes dies unexpectedly of a heart attack, or is sent to The Sanitarium as a gibbering wreck. Darkest Dungeon is not for the faint of heart, but anyone who likes Roguelike RPGs, and a serious challenge, will probably enjoy it. The game looks and sounds excellent, with well-drawn, atmospheric artwork, and dynamic animation and special effects.

Darkest Dungeon was a pretty big hit when it was initially released, selling over two million copies in its first year of sale. A number of DLC add-ons have been released for the game: The Crimson Court and The Shieldbreaker were released in 2017, and The Color of Madness was released in 2018. A sequel – Darkest Dungeon II – is due for release some time in 2023.