Strontium Dog and the Death Gauntlet for the Commodore 64 was the first properly-licensed video game based on a 2000AD character. It was coded by Stephen Kellett; co-designed by Mark Eyles, and published by Quicksilva in 1984.

You play mutant bounty hunter Johnny Alpha and have crash landed on a hostile planet while being pursued by the evil Styx Brothers. To survive you must run the ‘Death Gauntlet‘ in order to reach your spaceship, where your partner Wulf Sternhammer is waiting to rescue you.

There are five “entry levels” of play from the title screen, which I think equate to five difficulty levels.

The game is basically a scrolling shooter where the screen constantly moves and pushes you along forcibly while you move up and down to try to shoot stuff coming at you. You can push right and left to speed up/slow down although why you’d want to speed up I don’t know as it makes the game much more difficult. I think it would’ve been better to allow you to actually move left and right, rather than speeding up and slowing down the scrolling.

You have a blaster and can fire at your enemies, who bounce around the screen to avoid your shots, and can also shoot back at you. You also have a limited supply of ‘electro flares’ which you can use to blind your opponents temporarily by hitting the space bar. This stops them shooting at you for a short while.

Rocks and other obstacles on the landscape will make you trip and fall if you collide with them and you’ll lose strength when this happens. Being hit by enemy fire will also make you fall over. When your strength hits zero it’s game over. Collecting power-ups will replenish your strength to some degree.

Falling over is both frustrating and hilarious at the same time although Johnny can still shoot straight ahead while his face is in the dirt (which is weird).

There’s also a side-on view of the entire course at the bottom of the screen, but it’s pretty much impossible to see where you are on it due to the programmer not making it obvious enough.

There’s no getting away from the fact that Strontium Dog and the Death Gauntlet is absolutely awful and bears little to no relation to Strontium Dog as we know him. Graphically, the game is poor, with visuals that look corrupted, horizontal glitches that judder disconcertingly, and nondescript sprites. There’s no high score table, or high score shown, and when a game ends it just returns to the title screen and your previous score is never shown again, which kinda renders the game moot. It wouldn’t be unfair to say that the designers of this game didn’t know what they were doing…

As a game: I’ve played worse on the C64, but not much worse. Death Gauntlet is probably the kind of game that I’m sure would’ve made any self-respecting 2000AD fan demand their money back, had they shelled-out for it. Luckily this game passed me by at the time, otherwise it would’ve gotten short thrift. Playing it now, I can say that it’s only worth loading if you’re interested in the history of 2000AD-based video games. Otherwise, it’s a game sadly destined for the dustbin of history.

More: Strontium Dog and the Death Gauntlet on CSDb 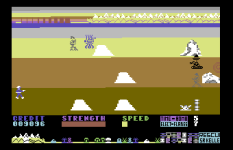 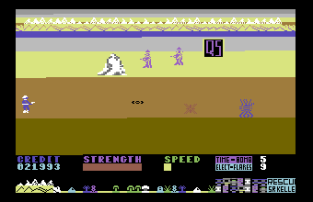 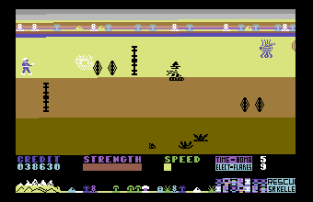 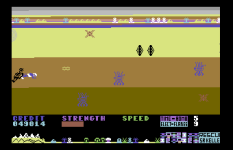 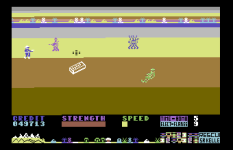 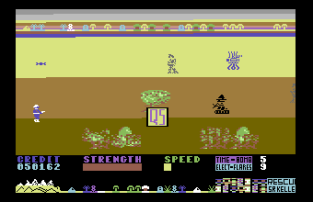 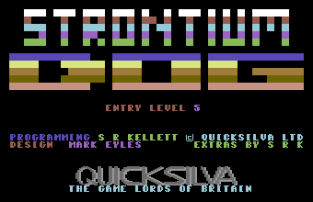 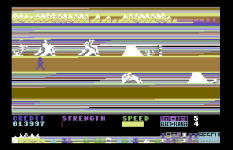 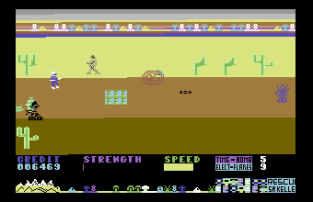 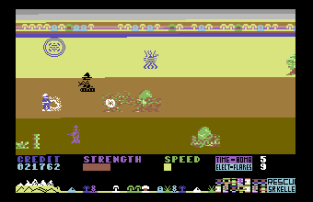 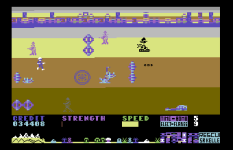 2 thoughts on “Strontium Dog and the Death Gauntlet, Commodore 64”