Shaun Southern‘s Trailblazer – I’m reliably informed – originated on the Commodore 16; not the Commodore 64 (on which it is probably better-known).

It is a third-person, zoom-into-the-screen ball-bouncing/racing game where the aim is to guide your ball to the end of a course without running out of time. There are holes in the course and if you fall down one you lose time. There are also different-coloured sections of the floor, each having a different effect on the ball. For example: green areas boost the ball with a speed up; blue areas force the ball to jump up; red areas will slow the ball down. You also have a limited number of manual jumps that can be used when needed.

The rules are simple enough, but getting to the end of a course is anything but easy. Lightning reflexes, deft jumping, and lots of twists and turns are required to beat any of the stages bar the first one, which is fairly straightforward.

Trailblazer was first published in 1986 by Gremlin Graphics and remains a firm favourite among Commodore 16 enthusiasts to this day.

One thing I will say about this game – in comparison to the C64 version – is that it benefits from giving the player a full-screen view. Although it doesn’t really affect the gameplay, it does look good next to the cramped split-screen display of the C64 version. This is because the Commodore 16 version is single-player only, and the C64 version focuses on a two-player game. Both games are great though. 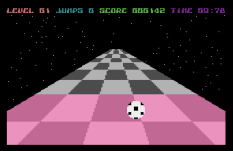 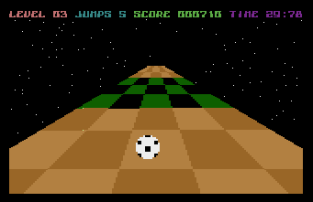 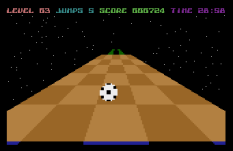 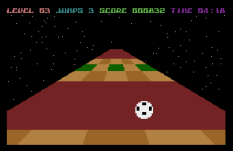 2 thoughts on “Trailblazer, Commodore 16/Plus4”