The 1984 arcade version of Lode Runner was made by Irem Corporation of Japan and features, bigger, cuter graphics than the Broderbund original, but still the same great gameplay.

All the level designs and gameplay tricks are instantly recognisable, and thankfully Irem resisted the temptation to change the game too much. They even kept with the established Lode Runner standard of keeping every level set to one screen, without resorting to scrolling, while at the same time making the graphics bigger, more detailed, and more appealing.

The only downside to Lode Runner arcade is the rather drab use of colour. While I’m not advocating the kind of explosion of colour as seen in the Atari ST version of Lode Runner, I think that this arcade version could have benefitted from a more varied palette. All the levels just seem a bit… pink. And biege…

Other than the lack of colour (ironic considering that the original Lode Runner was hardly a riot of colour), arcade Lode Runner is a wonderful conversion/interpretation of Doug Smith‘s classic platform game and is well worth seeking out. 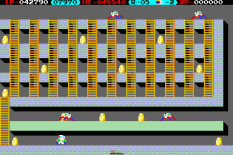 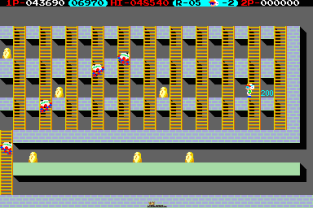