Sega‘s tremendous 1987 arcade hit, After Burner, used powerful sprite scaling technology in its cabinets back in the day, to create the mind-bogglingly fast on-screen visuals.

In the game you fly a third-person F-14 Tomcat jet into the screen at high speed, and blast away at oncoming enemies and projectiles. You can roll and turn upside down, and fire a canon and rockets.

In arcades in 1987 some versions of After Burner had moving cockpits, that tilted and swayed as you pulled on the joystick. And, having played the game in one of those very machines back in 1987, I have to say that it was a very exhilarating experience! Playing After Burner in an emulator doesn’t really compare.

After Burner is all about adrenaline-pumping action. The sheer speed of the game makes it interesting. That and the spectacular explosions and high scores.

More: After Burner on Wikipedia 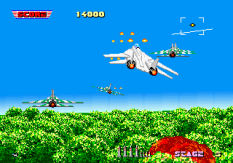 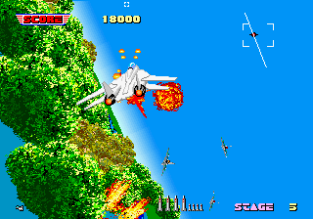 One thought on “After Burner, Arcade”