Nintendo‘s 1982 arcade game, Popeye, was somewhat ahead of its time, and also in some respects as archaic to play as a Game & Watch.

It was ahead of its time in the way that it used a relatively high screen resolution (512×448), which results in quite detailed, high res sprites that are unusual for the time.

Unfortunately the same can’t be said of the background graphics, which look like something designed on an Atari 2600… In fact: Popeye is a weird mix of graphical resolutions, but this weirdness doesn’t affect the gameplay at all.

Popeye is a simple three-stage game where the basic idea is to collect whatever Olive Oyl requires for her rescue from Bluto/Brutus.

On the first stage it’s hearts that she throws for Popeye to collect. On the second stage it’s musical notes, and on the third stage it’s the letters “HELP”.

Of course Popeye doesn’t have an easy time of it. He’s constantly got Bluto on the chase, and the purple meanie can also jump up, and lunge down at Popeye if he’s on a platform above or below him. Popeye can punch things, but he can’t punch Bluto.

What he can punch, though, are bottles thrown at him (by Bluto and the Sea Hags who appear occasionally), and also vultures, and other smaller hazards.

Popeye does have one weapon up his sleeve that can defeat Bluto and that is, of course, his trusty can of spinach. These appear occasionally at the sides of the screen and – if touched – turn Popeye red and make him invulnerable. Bluto runs away if Popeye‘s red, but if you catch him he’ll be knocked off the screen temporarily.

One final detail: every level bar the final one has a wrap-around point, allowing Popeye to exit stage left and appear stage right, and vice versa. It’s a useful way of avoiding the rather slow, AI-controlled Bluto.

While there’s no doubting that Popeye is a classic video game from the days of old, it also plays quite strangely. Almost like everything is ‘on rails’… Like the Game & Watch I mentioned previously. You can see how old the game is when Popeye passes in front of Bluto – there’s a black square around each character that reminds me of ZX Spectrum colour clash… Nintendo obviously hadn’t quite worked out how to do sprites and sprite masking properly yet… But, oh, how things were to change later with their Mario games. 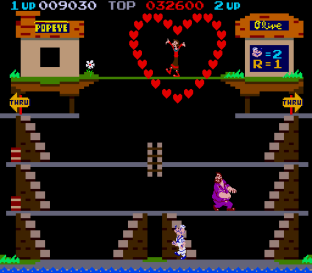 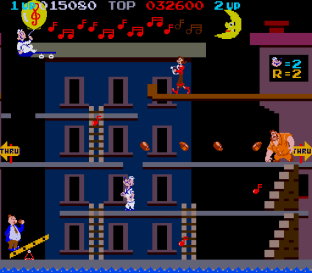 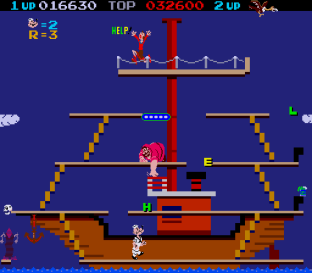 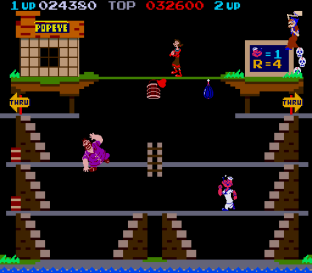 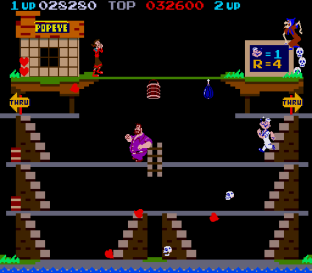