This 1983 action game sees you playing as Chuck Norris – the infamous action hero of the 1970s – and it really is quite bad.

Chuck is on his way to an ancient temple and must fight off various opponents who attack him in order to get his black belt and gain access to the temple… This game really is as bad as it sounds… Which is a pity really, because Chuck Norris deserves better. Or at least he deserved better back then… He was the guy who took on Bruce Lee in the Colosseum in Rome (and lost), in the 1972 classic Way of the Dragon. He was the guy who made chest hair fashionable in action movies… He was the ginger assassin…

I read the original manual before playing Chuck Norris Superkicks properly and had to laugh at how it tries to make the game sound more involved than it actually is. I mean: a big part of the game involves walking up a path, and you get penalised for walking on the bloody grass for God’s sake! Yes: Chuck walks up a path (avoiding the “tall grass”) and every now and then a fight breaks-out, cutting to a beat ’em up section.

The fighting sections are unsurprisingly lame. Chuck can block, kick, punch, and do a somersault jump. Beating opponents is a case of timing blows correctly, and also avoiding the shuriken they throw your way. If Chuck is hit by a throwing star he gets sent back to the last checkpoint with a time penalty. Beat your opponents and you are awarded a new belt (indicated by the colour change on the info bar at the bottom) and can continue walking up the path. Run out of time and it’s game over.

I’d almost put this into the same category as E.T., in that: there really isn’t much of a game in there, and what there is is pretty pathetic. It certainly doesn’t do justice to Chuck Norris  – or the ColecoVision – in any way shape or form.

Developer Xonox was a subsidiary of K-Tel and was one of the many companies to go bust during the big video game market crash of 1983. With games like this on their roster, it’s no surprise they didn’t survive it. 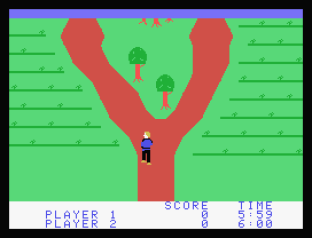 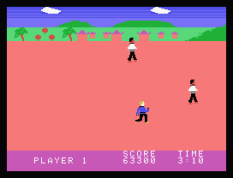 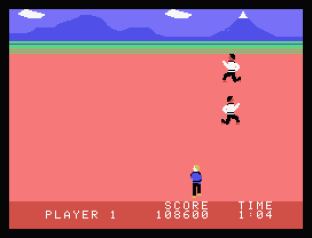 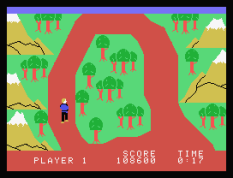