Based on the Paul Hardcastle pop hit of 1985, 19 (“nnnnn-Nineteen“), 19 Part One: Boot Camp is a multi-event action game that is supposed to portray the training phase of a Vietnam solder’s experiences.

Overall, the game is pretty good – if a little on a tough side. There are four sequential events: Assault Course, Shooting Range, Jeep Training, and Unarmed Combat, and the aim is to work your way through them in order to take on your drill sergeant in unarmed combat at the end.

Graphically: 19 is nicely-drawn, coloured, and animated, but isn’t particularly special. The soundtrack – a chiptunes version of Hardcastle‘s hit – was created by legendary C64 composer Rob Hubbard, and is worthy of note. The gameplay is okay – it’s not bad, but it’s not great either. The final beat ’em up section is pretty poor, when compared to the likes of International Karate Plus (which came out a year before this).

19 Part One: Boot Camp was published by Cascade Games in 1988 and was a reasonable success. Unfortunately: there was nnn-no part two. It nnnn-never got made. 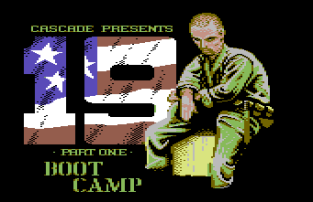 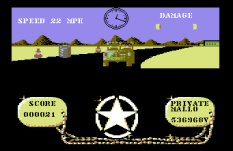 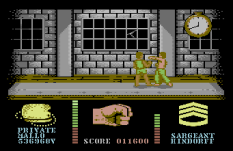