Programmed by Archer MacLean himself (the man behind the original Commodore 64 version), and published by System 3 in 1988, the Atari ST conversion of the classic International Katate+ is pretty much flawless, and is also arguably the best beat ’em up on the entire system.

Everything in IK+ has been refined to the nth degree. The animations, the backgrounds, the controls, the hit detection. Actually, the hit detection can be too tight sometimes… You think you’ve laid on the perfect headbutt, but “computer says no”.

International Karate+ also has two different bonus rounds – one with you deflecting bouncing balls away with a shield, and another where you have to kick bombs away before they explode. IK+ fans will need no explanation.

If you’re one of those unlucky people who have never played IK+ before, then maybe the Atari ST version is the best place to rectify that. It’s more colourful and more detailed than the original and retains every ounce of its playability and compulsiveness.

Tip: press ‘T’ during play to make their trousers fall down.

More: International Karate Plus on Wikipedia 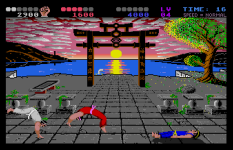 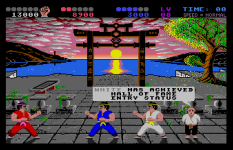 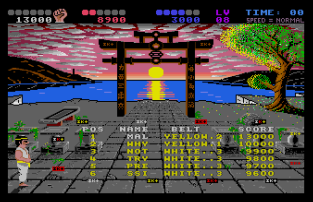