The very first version of SimCity 2000 was released for Apple Macintosh by Maxis in 1993, followed soon after by a PC MS-DOS version.

The game was one of the first to use “SVGA” high resolution (640×840) graphics on a PC and even used its own version of the Mac WIMP environment in a PC game. The designers of SimCity 2000 were obviously Mac fans who did everything they could to bring the (then) familiar Macintosh display style to the early PC. Ironically, a Windows version of SimCity 2000 followed soon after.

Although SimCity 2000 is only the second SimCity game, it is quite a leap from the original game. The same basic play tenets are there – build a city; make your residents happy; expand and enhance; do your best to clean up after natural disasters… The presentation, though, is so much more detailed than before. SimCity 2000‘s isometric graphics are beautiful and iconic. The in-game detail – in terms of variables to play around with – is so much more complex than before.

SimCity 2000 is pre-Sims era Maxis, but it sees them break new group for a second time. More, actually, because Maxis had released a number of successful Sim games before SimCity 2000 (off the top of my head: Sim Ant, Sim Earth, Sim Life, Sim Farm, and of course SimCity).

SimCity 2000 was Maxis at the top of their game, before The Sims sent them stratospheric. 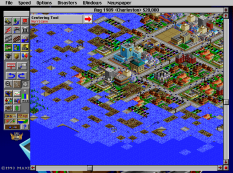 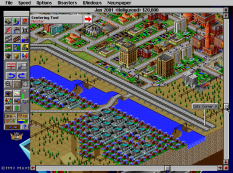